"I will put bad people in jail!" said one child after being asked what he would do after becoming a police officer 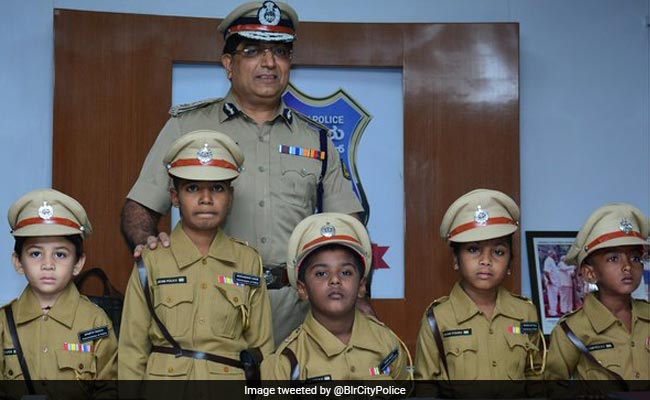 Five children were appointed Commissioner of Police in Bengaluru.

Proudly adorning the signature khaki police uniform, five terminally-ill children assumed command as Bengaluru top cop for a day as part of a special initiative by city police and ''Make a Wish'' foundation.

The five children - Ruthan Kumar, Mohammad Sahib, Sayed Imad, Shravani and Arfath Pasha - were also given the customary guard of honour from police team as well as the dog squad before assuming charge as the city's Commissioner of Police.

The children were seen happily interacting with police dogs and looked visibly elated when they were handed police gun and handcuffs.

We, BCP fulfilled the dreams of 05 children to be Police Commissioner for a day.@CPBlr Sri. Bhaskar Rao, IPS handed over the charge to the children and motivate them to overcome in their Critical medical conditions. BCP made their Dream Come True. https://t.co/CIGmS5G4r6

Upon being asked what you would do after becoming a police officer, one of the kids, Arfath, responded by saying, "I will put bad people in jail!"

Sharing more details of the initiative, Bengaluru city Police Commissioner Bhaskar Rao said, "We were approached by Make a Wish foundation a couple of days ago and got to know that the children wanted to visit a police station. We even gave them real guns and handcuffs, they were really excited".

Gangadhar from ''Make-a-Wish'' foundation said that the organisation had approached the police commissioner after they got to know that the children wanted to visit a police station.

"We work with small children who are battling life-threatening diseases. The children''s deepest wish was to become police officers. We are very happy that the police helped us today to fulfil the wishes of the little children," he said.