After Racist Abuse Over Euro Loss, Tweets Of Support For England Footballers 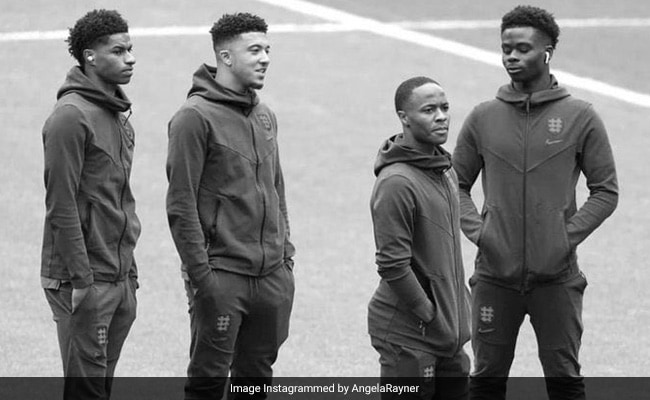 British Prime Minister Boris Johnson and Prince William were among those who condemned the racist abuse that England's football stars received after their loss at the hands of Italy in Euro 2020. Marcus Rashford, Jadon Sancho and Bukayo Saka, the three players who missed England's penalties on Sunday, became the target of a stream of racist abuse on social media. "This England team deserve to be lauded as heroes, not racially abused on social media," Mr Johnson wrote on Twitter. "Those responsible for this appalling abuse should be ashamed of themselves." Prince William, who is president of England's Football Association, said he was "sickened" by some of the comments. "It is totally unacceptable that players have to endure this abhorrent behaviour," he said on Twitter. "It must stop now and all those involved should be held accountable," the 39-year-old royal added.

On Twitter, where many of the racist posts had surfaced, several users also voiced their outrage against the abuse.

Solidarity with Jadon Sancho, Marcus Rashford and Bukayo Saka. The racist abuse directed towards these three brilliant young England players is a disgrace. Boris Johnson and Priti Patel take note. This is why the England players take a stand against racism #SayNoToRacismpic.twitter.com/B7lkWJiWT8

“It's just not what we stand for."

England manager Gareth Southgate says the racist abuse directed at his players after the team's defeat to Italy in the Euro 2020 final on penalties is “unforgivable”.https://t.co/8Kn55boX2ypic.twitter.com/9z61otbfUj

The England team has been highlighting the issue of racism throughout the tournament, taking the knee before all their matches, according to Reuters. However, some fans have booed the gesture, with critics viewing it as an unwanted politicization of sport and expression of sympathy with far-left politics.

Angela Rayner, Labour MP for Ashton under Lyne, tweeted: "The England players rightly take a knee because they are victims of vile racist abuse."

Marcus Rashford wouldn't need to campaign to feed children if the government didn't leave them to go hungry.

The England players rightly take a knee because they are victims of vile racist abuse.

Black Britons don't need to prove themselves to anybody. pic.twitter.com/i8EHvVseLB

Priti Patel, Home Secretary of the United Kingdom, said she was "disgusted" at the abuse - and promptly faced a barrage of criticism herself for "stoking the flames" when she said fans have right to boo England team for 'gesture politics' of taking the knee.

You played your part, stoking the flames when they were taking a knee. You're a disgrace to British Asians.

The Football Association, meanwhile, put out a statement criticising the behaviour as "appalling".

We've issued a statement after a number of @England players were subjected to racist abuse online following the #EURO2020 final: https://t.co/B7gB180OQa

On Sunday night, when England and Italy set foot on Wembley, the Three Lions had the home advantage. But there couldn't have been a better culmination of what has been a truly marvellous period of football for the Azzurri, who lifted the Euro 2020 title after defeating England 3-2 on penalties.

The chants in the run-up to the final as well as during the game were "It's coming home", a phrase picked from 1998 Three Lions song, written and performed by comedians David Baddiel and Frank Skinner with the Lightning Seeds band. However, when the Italians triumphed over the English in Euro 2020, Azzuri fans trended #ItsComingToRome.

A Twitter user shared this video of fireworks after Italy's victory in the Euro 2020 final. "We are so fortunate to have seen our Nation become World Champion and Champion of Europe," wrote the user.

This was the second time Italy won Euro. Their last victory came way back in 1968 when they also became the first home country to win it. Interestingly, it came just two years after England were crowned world champions.

While Italy, under the captaincy of Giorgio Chiellini, is taking the Euro 2020 trophy to Rome, for English fans, the wait for a major world football trophy continues.