F.R.I.E.N.D.S. reunion: The cast of the sitcom came together for a highly-anticipated reunion that premiered on May 27 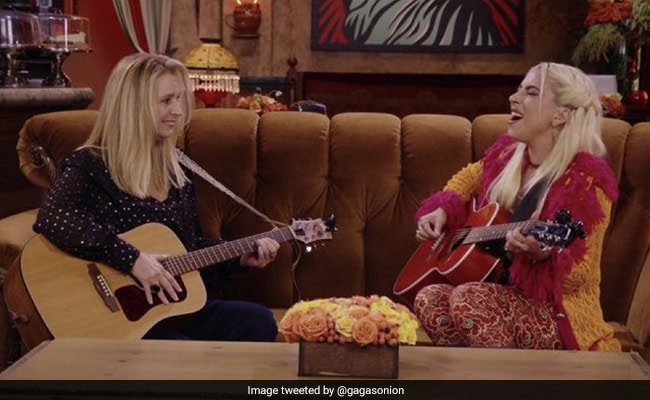 The iconic sitcom, F.R.I.E.N.D.S, has been an integral part of pop culture across the world since its premiere in 1994. The show gained a cult status among television viewers in the 1990's and 2000's, only to find an entirely new generation of fans when it made its debut on streaming platforms in the last few years. The success of the show brought with it innumerable demands for a reunion. After several years of contemplation, the primary cast, which includes Jennifer Aniston, Matt LeBlanc, Lisa Kudrow, Courteney Cox, David Schwimmer and Matthew Perry, has reunited for a special episode that premiered on May 27.

In addition to the cast, the reunion also features a host of celebrities. While some of these guests have played supporting roles in the series, many have been fans of the sitcom. One such celebrity is American singer, songwriter, and actress Lady Gaga. The musician has appeared on the show to recreate Smelly Cat, an extremely popular song that was performed on the show by Lisa Kudrow's character Phoebe Buffay. In the series, Phoebe is a masseuse who nurtures a passion for singing and performs at the famous coffee show, Central Perk, where the friends hang out.

In the F.R.I.E.N.D.S Reunion episode, the Academy Award winner joins Lisa Kudrow who is crooning the track alone in the coffee shop. Lady Gaga sings along with Lisa Kudrow, after saying that Smelly Cat is one of her favourite songs. Lady Gaga belts out the number in her famed voice with a chorus backing her, as Lisa Kudrow watches on.

At the end of the performance, Lisa Kudrow pulls off a trademark Phoebe line and mumbles, “I still think it's better when it's just me.” To this Lady Gaga says, “It is.”

The collaboration sent fans into a tizzy and many expressed their feelings on social media.

One user said that the performance was “Oscar-worthy”.

Several others loved how Lisa Kudrow channelled Phoebe at the end of the act.

THE MOST REQUESTED "SMELLY CAT ????" IS HERE Y'ALL & ALSO I LOVED HOW PHOEBE IN THE END SAID " NOT AS GOOD AS ME " TO LADY GAGA ????
pic.twitter.com/bnoL1C3Hv3#FRIENDSREUNION

One comment said, “Phoebe would've told Lady Gaga to tone it down and follow her lead instead.”

phoebe would've told lady gaga to tone it down and follow her lead instead ???? https://t.co/SMbbuA3jNc

Loyal Phoebe fans even said that they preferred the original version to Lady Gaga's performance.

The one where I prefer Phoebe's version over Lady Gaga ???? #FriendsReunionhttps://t.co/DSxee0z7uw

“This is the duo we didn't know we needed,” read a comment.

Here are some of the other reactions:

lady gaga is the 14th queen#AllStars6pic.twitter.com/qD5TyKRkPQ

Okay so Lisa Kudrow und Lady Gaga need to re-record #SmellyCat#FriendsReunion#FriendsTheReunion Love it, love how they just get back into character. I missed them soooo much #FRIENDSREUNIONPARTY#Friends#LadyGaga#LisaKudrowpic.twitter.com/pqJ3e2O1IZ

The list of guest stars on the F.R.I.E.N.D.S Reunion includes David Beckham, Justin Bieber, BTS, Lady Gaga, Cara Delevingne, Elliott Gould, Mindy Kaling, Maggie Wheeler, Thomas Lennon, Malala Yousafzai, and Cindy Crawford. Now that you have caught up with the details, we will leave you to hum, “Smelly cat, smelly cat, What are they feeding you?”