Excited Rhino Runs "Like A Puppy" On Seeing His Zookeeper. Watch

Crockett the rhino got the zoomies on seeing his keeper. 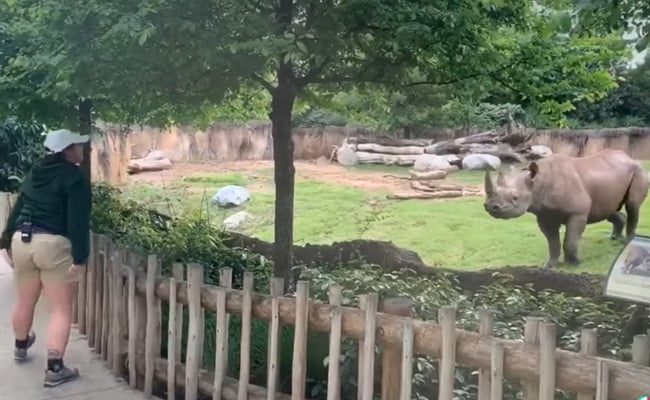 Crockett the black rhino got the zoomies on seeing his zookeeper.

An adorable video shows the moment a rhinoceros got excited on seeing his keeper. Footage filmed at Fort Worth Zoo in Texas has captured Crockett the black rhino bouncing around in excitement on seeing his zookeeper Kylee. "This adorable video shows the moment a critically endangered rhino in a closed zoo got excited to see his keeper - and started running back and forth like a puppy," reported news agency SWNS while sharing the video, which was filmed on Sunday.

The six-year-old rhino was seen following Kylee as she skipped on the other side of the fence. The video shows the large animal bounding up and down his enclosure in tandem with his keeper.

"Crockett appeared to get excited as Kylee approached his exhibit on Sunday afternoon," a spokesperson for the zoo said, according to Real Fix Magazine. "As he raced around his habitat, we affectionately said he got the 'zoomies.'"

The Fort Worth Zoo has been closed to public since March 14 due to the coronavirus pandemic. Staff and keepers, however, have been at the zoo every day to feed and care for the animals.

"Crockett is the youngest of three critically endangered southern black rhinos here at the Zoo. He is playful and excels during training sessions with keepers."

The delightful video has proved to be a hit on Facebook, where it has been viewed over 2 lakh times. It has also collected hundreds of comments.

"Well obviously Crockett missed Kylee," wrote one person in the comments section. "Just like a dog. Let's play," said another.