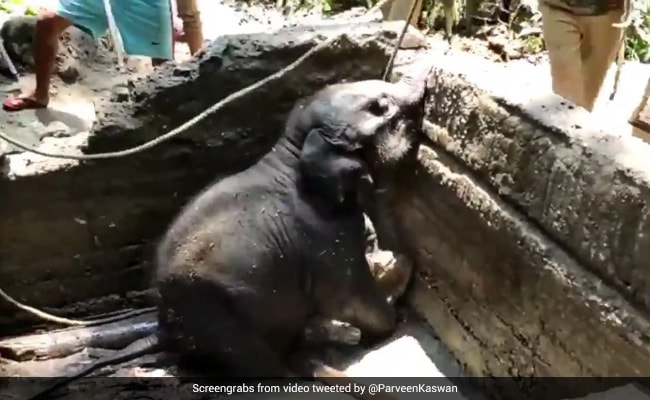 A baby elephant was rescued from a water reservoir.

A dramatic video of wildlife officers rescuing an elephant calf from a water tank in a remote village has emerged on social media. It showed a team of wildlife officers pulling the calf out of the walled reservoir using ropes and wooden planks. The video was tweeted by Indian Forest Service Office Parveen Kaswan, who said the “kiddo” was safely rescued as the calf's mother watched the rescue operation from a safe distance. The calf was later reunited with the family and it walked into the jungle.

Mr Kaswan did not disclose the location of the incident.

Kiddo fell into reservoir from where water was being supplied to village. Territorial team, wildlife squad II & vet team reached on time. Was rescued & happily united with family. Mother was watching from safe. Our team. pic.twitter.com/NqSnhH94Rs

The challenging operation continued for nearly four hours. Wildlife officials and villagers brought down one side of the reservoir wall to allow the calf to climb up. Initially, the calf tried to climb the wall from a different side and failed. Then it was directed to the opening created for it, from where it was pulled out after a little struggle. The officials even threw bricks into the reservoir to raise the ground level.

In a series of tweets, Mr. Kaswan explained how the operation was conducted.

A watchtower staffer first saw the calf into the reservoir and informed the area control room. First, the patrolling team reached the spot, then range staffers and mobile squad arrived as a backup team. During the operation, all communication between officials was done through radio transmission as the area had no mobile phone network and no vehicle could reach there. Mr. Kaswan said the reservoir will be repaired soon with protection around it to avoid a similar accident again.

Range territorial team. It took 3-4 hours. But all went fine without any harm to mother or calf.

It will be repaired soon with protection this time.

This is how unfolded. Watchtower staff called control room & range control by RT.

Since it was place where no vehicle can go. No mobile network.

A number of people are praising the efforts of the wildlife team, including a fellow forest service officer.

Every rescue is different and brings different challenges. Good work Parveen and team for managing rescue well in a remote area. ???? https://t.co/6ubhkaeRpY

The forest cadre needs priority, power and expansion as we've engulfed all the major habitat of animals,
Their troubles due to human intervention and human settlements are surely ours to solve.
The buffer belts are all gone, more should be trained for animal man conflict.

Wonderful. What a team work with dedication? Kudos to all team members for this timely action. Mother elephant's blessings will be there with them forever.

Mr. Kaswan had previously tweeted a video of another elephant being rescued from a pit in Karnataka, using a JCB earth mover. The officials stretched a hand of the JCB machine to push the elephant from behind in its endeavour to climb up the mound of loose earth.

Third JCB shows what hand of god means. FD team able to rescue this gentle giant, though he tried to fight in the last. From Coorg. @sats45@JCBmachinespic.twitter.com/vVzlaa4WA7

Forest department officials have, time and again, successfully conducted such rescue operations in remote areas, where the availability of resources is limited.

"Once In A Lifetime" Sighting: Giant Deep-Sea Squid Carcass Washes Up On New Zealand Beach