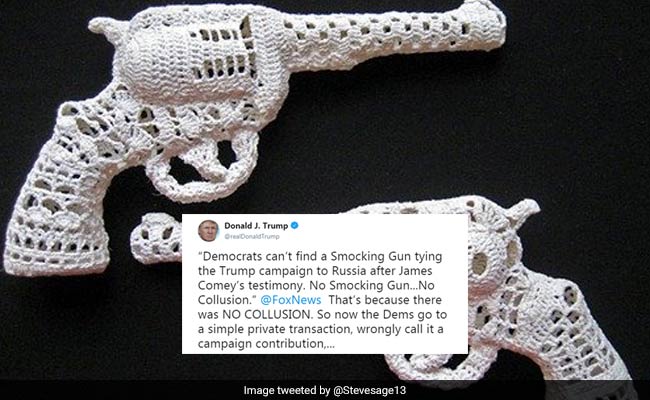 The "smocking gun" tweet has led to a lot of hilarious jokes.

US President Donald Trump is no stranger to typos and strange spellings. He is, after all, the man who gave us the gem that was covfefe. And it seemed that the popularity of covfefe had remained unmatched, in spite of Mr Trump's many other typos - up until now, that is. In a tweet posted a day ago, however, Mr Trump made a typo that has since then inspired thousands of jokes and memes.

One can safely assume he meant 'smoking gun' and not 'smocking gun'.

“Democrats can't find a Smocking Gun tying the Trump campaign to Russia after James Comey's testimony. No Smocking Gun...No Collusion.” @FoxNews That's because there was NO COLLUSION. So now the Dems go to a simple private transaction, wrongly call it a campaign contribution,...

The tweet was posted as part of a series of tweets regarding the Robert Mueller probe into Mr Trump's potential dealings with Russian officials.

With its misspelled word, the tweet quickly prompted a flood of ridicule and inspired a ton of memes and jokes on social media. We collected some of the best ones for you.

Merriam-Webster then explained what smocking is

Today in Spellcheck Can't Save You:

'Smocking' is a type of embroidery made of many small folds sewn into place. https://t.co/3wbxPG24ne

Then the search for a smocking gun began

OMG I FOUND IT!!! THE SMOCKING GUN! #SmockingGunpic.twitter.com/1qDEpElbFM

And then came the covfefe comparisons

He's been smocking the covfefe again

In the interests of clarity, and to end all the confusion. I can now confirm that the smocking gun, is all covfefe! pic.twitter.com/H95IcUjiy3

Which tweet made you laugh the hardest? Let us know using the comments section below.