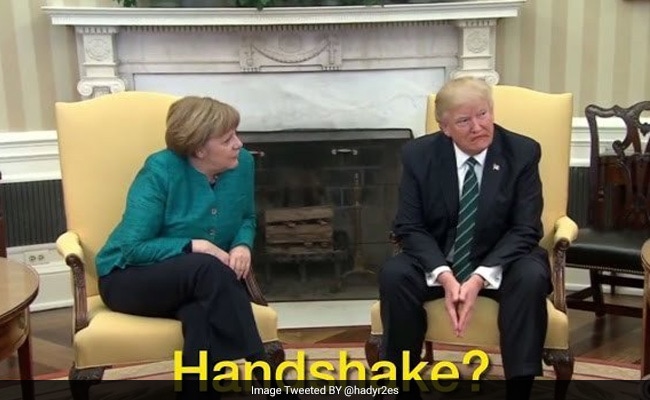 New Delhi: Yesterday, during a photo opportunity at the White House, US President Donald Trump refused to shake German Chancellor Angela Merkel's hand. After a joint news conference where he publicly disagreed with her on major issues, Mr Trump snubbed a handshake request from Ms Merkel - and sent Twitter into a meltdown. A short clip of the awkward moment quickly made it to the Internet, where Tweeple were quick to jump to conclusions, draw comparisons and outright condemn Mr Trump for his 'childish' behaviour.

Donald J. Trump appears to ignore requests for a handshake with Angela #Merkel during their first meeting.
Credit: @businessinsiderpic.twitter.com/Q4QZqpabJN

As photographers asked the two to shake hands, Mr Trump, avoiding eye contact, appeared to snub this request. While it is possible that Mr Trump simply did not hear Ms Merkel over the din, people were unwilling to accept this theory. Some pointed out that his body language indicated that he was uncomfortable. Well, you can check out some of the funniest reactions to that moment below:

3. And some more comparisons...

5. A few people speculated about why this refusal happened at all

Trump: "Nobody has greater respect for women than me."

Promoted
Listen to the latest songs, only on JioSaavn.com
Merkel: "Would you like a handshake?"

6. Some already knew why

Trump is apparently intimidated by strong, dignified women. Merkel dodged a bullet with that handshake. Trump's an embarrassment.

7. Another running gag was brought up

Trump didn't want to shake hands with Merkel? Oh, I get it. Reporters asked for handshake, those fake news, OMG, Trump stand your ground!

8. All in all, people were not happy

Anyone notice the body language?#merkeltrump#Merkel#AngelaMerkel#NoShake#Handshake#Trump#wiretap#GermanChancellorpic.twitter.com/DS7WpwnSgr

What do you think of this handshake incident? Let us know using the comments section below.