The US President made a surprise appearance at the wedding reception. 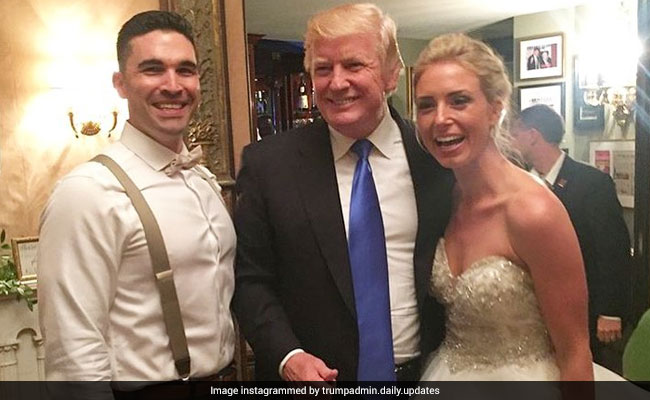 Donald Trump's surprise appearance left the bride 'ecstatic', according to a guest.

On their wedding reception this Saturday night, a couple received a very unexpected surprise: a visit from US President Donald Trump. During his weekend golf retreat at the Trump National Golf Club in New Jersey, the President decided to crash the wedding reception Kristen Piatkowski and Tucker Gladhill, the CNN reports. At the reception, Mr Trump asked for the names of the bride and groom and happily posed for photos with the couple. He also signed 'Make America Great Again' hats for some of the guests.

Mr Trump's surprise stop at the wedding also made some guests break out into chants of 'USA.'

Trump made surprise stop at wedding reception last night at Bedminster. The crowd broke out into chants of "USA!" (Video obtained by CNN) pic.twitter.com/sfe6zFdOlI

According to the CNN, members of the Secret Service came into the room minutes before Mr Trump was to enter in order to clear the way and make sure that guests didn't surround him.

Because, who wouldn't want a Trump hat as a wedding present.. pic.twitter.com/qIQ0fB33Ry

Sean Burke, a guest at that wedding, told The Washington Post that Mr Trump's appearance was brief but got everyone excited. "It was very brief. He waved to everyone. Everyone obviously got very excited, got out of their chairs and came to take pictures," Mr Burke said. "The bride came running out, and he gave her a big hug and a kiss, so she was just ecstatic. And then the groom found out, too. ... No one knew it was going to happen."

This is not the first time that the 45th President of the US has crashed a wedding. In February this year, Mr Trump dropped in at Vanessa Falk's wedding reception at his golf retreat in Mar-a-Lago.