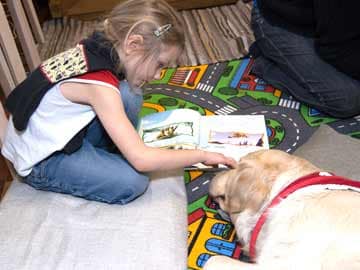 Ingrid, 6, reads on February 26, 2014 to a dog hired by a library in Tartu, south Estonia to encourage kids to practice reading books aloud, to increase confidence of shy kids.

Tartu: A library in high-tech Estonia is getting children to read out loud to dogs to boost their confidence, reading and social skills with a little help from man's best friend.

Tentel the long-haired Afghan Hound, a peppy Golden Retriever named Elli and a fluffy Newfoundland named Leero lend their ears at the library in the eastern city of Tartu twice a month.

"For kids who have problems with reading or low self esteem there is no better therapy than to practise reading aloud to a dog," project manager Ewa Roots told AFP.

"Dogs are calm listeners and unlike other kids or adults, will never be critical when a child makes mistakes while reading," Roots said.

"Sessions with dogs boost self confidence and children start to feel more free and secure to express themselves," she added.

The innovative educational project launched in February is free of charge and available to all children who want to participate.

Most are five to six years old, some are up to 10 and there is even one 16-year-old.

Literacy in this tiny ex-Soviet European Union country of just 1.3 million people is already 100 percent for citizens who are 15 years of age and older, according to the latest World Bank figures.

Dubbed e-Estonia, the Baltic state which gave the world the Skype communicator is renowned as an IT trailblazer and ranks as one of the world's most connected countries.

But taking a decidedly more low-tech approach to communication, the library in Tartu encourages youngsters to have eight to 10 half-hour sessions of reading to their new four-legged friends.

"Children first decide which dog they like the most," Roots explains, adding that the canine reading sessions are held in one large room for an added sense of security.

"When the shyest children see someone starting to read to their dog, they will soon do the same," she noted.

Children can bring their own books to the sessions or choose ones from the library.

Leero was happy to listen to Harti, a delighted six-year-old boy, read Winnie-the-Pooh for about 20 minutes.

Five-year-old Kevin petted all the pooches before choosing Elli as his audience.

But Tentel fell asleep on six-year-old Ingrid, who nevertheless kept on reading and showing pictures from the book Ice Age with gusto.

Roots says she has heard of children reading to ponies and even pigs instead of canines in other countries.

The library is also encouraging children with pet dogs to read to them in the comfort of their own homes.
Comments
EstoniaTartukidsdogssocial skills