Dog Shakes Hands With Devotees Outside Temple In Adorable Video

In the short clips, the dog can be seen sitting tall and proud on an elevated platform outside the temple as a stream of devotees walk past him 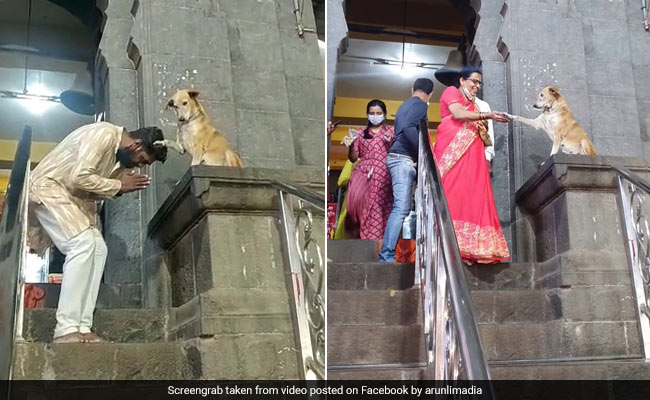 A friendly dog was filmed playing with devotees outside a temple in Maharashtra.

'Pawsitively' adorable footage going viral on Facebook shows a dog shaking hands with and giving his 'blessings' to devotees outside a temple in Maharashtra. Two videos of the dog were shared on the social media platform by user Arun Limadia on Sunday, and have since won thousands of hearts. The videos were recorded at the Siddhivinayak temple in Siddhatek.

In the short clips, the dog can be seen sitting tall and proud on an elevated platform outside the temple as a stream of devotees walk past him. As one woman extends her hand to the dog, he gently places his paw on it. When she walks on, the pooch raises his paw again to 'shake' hands with other devotees exiting the temple, eliciting smiles from onlookers.

In another video, a devotee folds his hands and bows down in front of the dog, who again raises his paw as if to 'bless' the man. The man then places an affectionate peck on the dog's head before moving on. "Blessed," wrote Mr Limadia while sharing the video.

The two videos have gone viral on Facebook, together collecting over 15,000 'likes' and more than a thousand comments from viewers gushing over the dog.

"Look at this cutie!" exclaimed one Facebook user. "Such a good boy," said another.