What Jeff Bezos Is Superstitious About, As Told To Shah Rukh Khan

"I pretend to be very scientific but I actually am superstitious, a little bit" said Jeff Bezos. 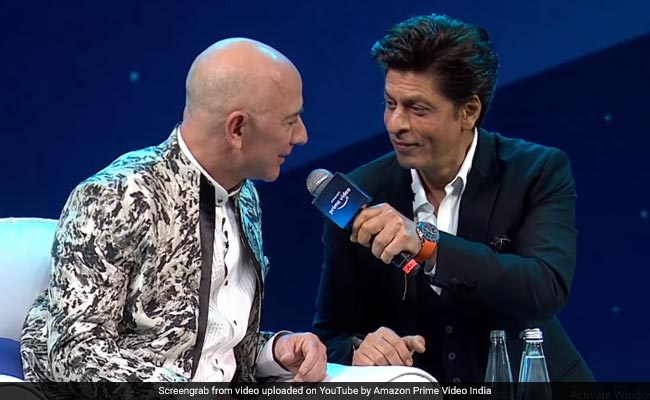 Jeff Bezos was recently in India for a three-day visit.

Jeff Bezos, who studied electrical engineering and computer science at Princeton before starting Amazon - one of the Big Four tech companies of the world - may not seem like a superstitious person, but he claims otherwise.

The founder of Amazon and Blue Origin sat down with Shah Rukh Khan and Zoya Akhtar for a 40-minute chat during his recent visit to Mumbai. During the event, he revealed that he has "lucky boots" he wears every time Blue Origin - his human spaceflight startup - launches a space vehicle.

"I pretend to be very scientific but I actually am superstitious, a little bit" Mr Bezos told Shah Rukh Khan and Zoya Akhtar. "I have a pair of lucky boots and... these are Texas cowboy boots. I wear them. They're giant... very flashy."

Jeff Bezos, 56 then provided "evidence" that his lucky boots work.

"I wear them every time we launch our space vehicle. We only had one failure at the very beginning of the programme, and that's the only time I did not wear the lucky boots," he said. "So I present to you the evidence," he said to cheers from the crowd.

Jeff Bezos has often spoken about his lucky boots before. In 2016, he tweeted about Blue Origin's successful launch of its New Shepard rocket and explained that the boots were given to him by a friend.

In 2018, he shared a picture that showed him wearing the cowboy boots and wrote: "The lucky boots worked again."

The lucky boots worked again. Huge kudos and thanks to the entire @BlueOrigin team. #GradatimFerociter

Jeff Bezos was in India for a short trip last week. He began his trip to India last Tuesday by visiting the memorial to Mahatma Gandhi in Delhi. During his three-day trip, he also flew kites with a group of children, visited an Amazon 'Silent Delivery Station' in Mumbai and took a tour of the Taj Mahal in Agra.