Did 'The Simpsons' Predict Coronavirus, Murder Hornets? Twitter Thinks So

A clip from a 1993 episode of 'The Simpsons' has gone viral with 5 million views. 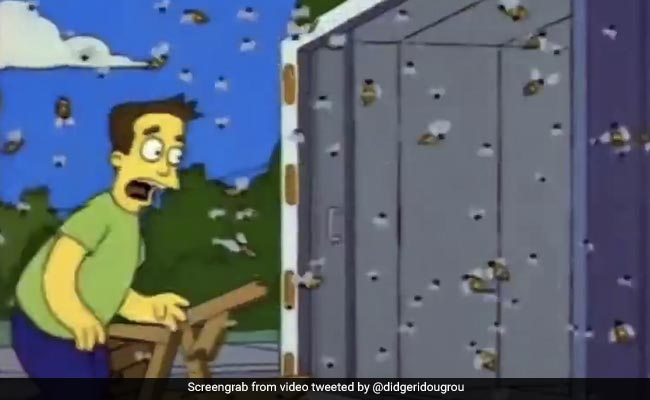 In its three-decade-long run, The Simpsons has featured some storylines that came eerily close to real-life happenings years later. The election of Donald Trump, the invention of smart watches, and the US winning an Olympic medal in curling are just some of the events that the American sitcom predicted well before they happened in real. Now, some social media users are convinced that an early episode of The Simpsons also came close to predicting the ongoing coronavirus pandemic.

In fact, not only the pandemic, it seems like an episode from 1993 also foretold the invasion of "murder hornets" - an invasive, predatory insect that has turned up in Washington state near the Canadian border, where it could potentially pose a threat to humans and the beekeeping industry.

According to CNET, the 1993 episode titled "Marge in Chains" (season 4, episode 21) shows a mysterious virus from Asia invading the town of Springfield. The disease, which originated in Japan, is dubbed the "Osaka Flu" in The Simpsons, where it spreads like wildfire in the small town.

In a clip from the episode that resurfaced on Twitter recently, angry residents can be seen storming a hospital to demand a cure from Doctor Hibbert, who says that all he can prescribe is bed rest. The frenzied townspeople then accidentally unleash a swarm of killer bees - a scene which reminded many of murder hornets.

"The Simpsons really did predict 2020," wrote a Twitter user while sharing the clip.

Since being posted online a day ago, the video has gone viral with over 5.4 million views and more than 80,000 'retweets', along with hundreds of amazed comments.

They even got the killer hornets right.

Maybe we should just ask the Simpsons writers what's going to happen next.