Did Donald Trump Break Royal Protocol By Touching The Queen?

Not touching the Queen is an unwritten rule of British monarchy 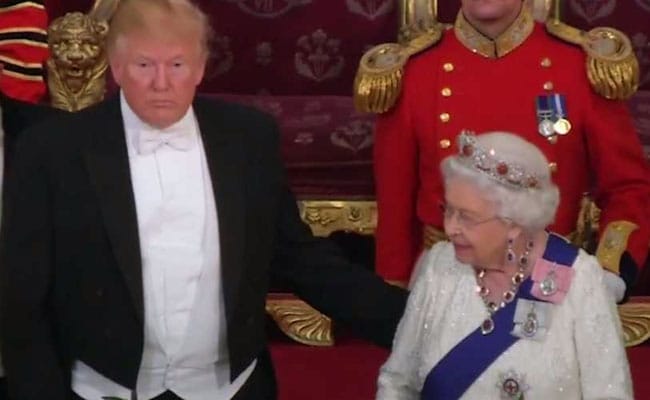 Donald Trump appeared to pat the Queen's back during a state banquet.

US President Donald Trump put his hand on Queen Elizabeth's back while attending a state banquet at the Buckingham Palace on Monday, sparking a discussion on whether or not he broke royal protocol. The incident occurred after Mr Trump, 72, concluded a glowing speech praising the Queen, 93, for her work during World War Two and hailing the bond between the US and the UK.

As he stood up, Mr Trump appeared to lightly pat the Queen on her back. The monarch appeared unruffled by what many have suggested is a blatant break from royal protocol.

According to the Express, touching Queen Elizabeth II has long been considered a great taboo and is one of the unwritten rules about how to behave around the royal family.

This rule, however, is not put down on the Royal Family's website, which states: "There are no obligatory codes of behavior when meeting The Queen or a member of the Royal Family, but many people wish to observe the traditional forms.

"If an individual wishes to observe the traditional forms, it is advised that men perform a "neck bow (from the head only)" while women do a "small curtsy."

Appears no one at @StateDept briefed Trump on Queen protocall. From press pool: "As the Queen rose to give the formal toast, Trump appeared to lightly touch her back with his left hand, as seen on the pool feed from the front.
Protocol dictates that one doesn't touch the queen."

Are you supposed to pat the Queen, Mr. President? pic.twitter.com/9UyNEc2ZuA

Donald and Melania Trump are on a three-day visit to Britain to mark the 75th anniversary of the allied D-Day landings.