Dhinchak Pooja's 'Selfie' Song Is Insanely Viral. Hear It At Your Own Risk 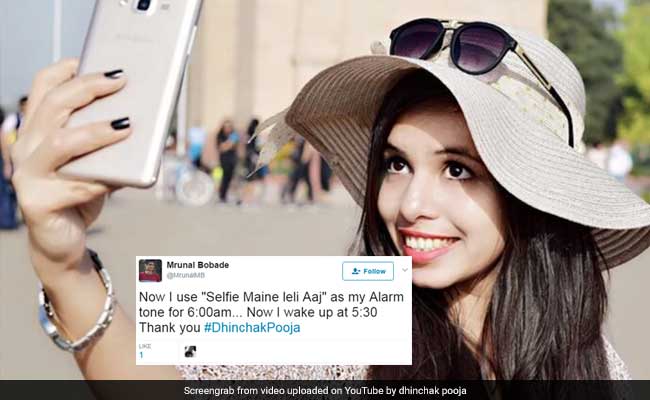 NEW DELHI: Forget Bajrangi Bhaijaan's Selfie Le Le Re - there's an all new anthem for the selfie-obsessed and it's taking the Internet by storm. If you spend enough time online, chances are you've already heard it. For those who haven't, grab your earphones and listen to Selfie Maine Leli Aaj sung by Dhinchak Pooja (we're not making this up, that is what the song's singer is called) right now. The track is currently trending on YouTube with over nine lakh views since being shared on May 14. The song is going so insanely viral, people on Twitter cannot stop talking about it.

The video - a little over two minutes long but feels longer - shows the singer driving around town in a fancy car singing about the selfies she's clicked all day. Umm... that's pretty much all the song is about. Hear the song below and decide for yourself.


Since the song made it online, people on Twitter haven't been able to stop tweeting about it.

If you didn't listen to dhinchak Pooja's new "Selfie Maine leli aaj" song, are you even a music lover? pic.twitter.com/mngLPL90mL

After you return back alive after listening to Dhinchak Pooja's "Selfie Maine leli aaj" pic.twitter.com/XUkbDAV1jK

Before and after listening to Dhinchak Pooja's "Selfie maine leli aaj": pic.twitter.com/TLDjaVLtEv

After reading all about dhinchak Pooja, today I watched her video " selfi mene leli" I've Never laughed like this. Truly dinchak she is.

This isn't Dhinchak Pooja's first rodeo. She also has two more songs Swag Wali Topi and Daaru. You can watch them here.

Tell us what you think of the song in the comments section below.Click for more trending news