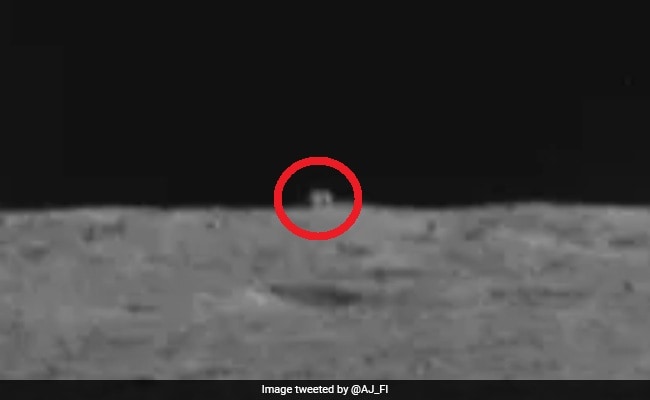 A cubic shape was spotted on the surface of the Moon.

A strange-looking, cube-shaped object, spotted on the surface of the Moon by China's Yutu-2 moon rover, has become the subject of much speculation on social media. The object was seen in photos released by China's space agency last week. According to Space.com, the rover spotted the object as it made its way across the Von Karman crater on the far side of the Moon.

The Yutu-2 rover is part of the Chinese Chang'e 4 mission to the Moon. It has been exploring the far side of the Moon since 2019.

Andrew Jones, a journalist for Space.com, highlighted the unusual sighting in a series of tweets shared Friday. "Image of a cubic shape on the northern horizon - 80m away from the rover in Von Karman crater," he wrote.

"it's not an obelisk or aliens, but certainly something to check out," he added in a follow-up tweet.

So yeah, it's not an obelisk or aliens, but certainly something to check out, and hard to discern much from the image. But large boulders (right) are sometimes excavated by impacts, as seen by the Chang'e-3 mission, which launched 8 years ago on Dec 1. [CNSA/CLEP] pic.twitter.com/ifOIFr4oQI

According to CNET, the object has been dubbed "mystery house" and scientists are likely to drive the rover closer to it in order to get a better look.

Although the discovery has created a buzz on Twitter, the most probable explanation is that the object is a boulder that was excavated upon impact. In 2019, Yutu-2 discovered a "green-tinged gel-like substance" on the Moon which turned out to be rocks - or, more specifically, a rock-like substance that forms when minerals and rocks get fused together.

More recently, the rover found a "shard" on the lunar surface which also turned out to be a rock.

Still, speculation is rife about what the cube-shaped object could be.

Chang'e 4 is China's fourth Moon mission and second to deliver a rover to the Earth's closest neighbor in space.