Why These Chennai Walls Are Suddenly Bursting With Colour 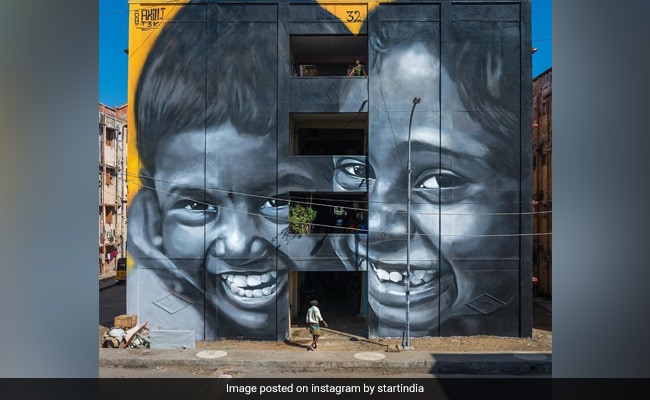 Kannagi Nagar in Chennai is being transformed with colourful murals.

Kannagi Nagar in Chennai - one of the biggest resettlement sites in India - is in the midst of a colourful makeover. Buildings that were once painted uniformly in conventional white and yellow are today coming alive with vibrant murals, thanks to the efforts of St+art India Foundation. According to The Hindu, the foundation has collaborated with Asian Paints, Greater Chennai Corporation and Chennai Smart City Limited to transform Kannagi Nagar into Chennai's first art district and engage with the community.

The project, due to be completed by March, will feature the works of 16 national and international artists on the large facades of Kannagi Nagar.

Kannagi Nagar is one of the largest slum resettlement sites in the country, home to 80,000 people. Its colourful transformation makes its India's fifth art district.

Six days ago, St+art India Foundation took to Instagram to share photos of the first completed mural at the site.

"Sarode's mural is dedicated to inhabitants of the area who had to move from the coast to Kannagi Nagar after the devastating tsunami of 2004," they wrote.

Explaining the concept behind the stunning mural, which features a mother-daughter duo amidst blooming flowers and crashing waves, the foundation continued: "While the bottom half of her mural with oceanic waves and fluttering fish represents the natural disaster that caused the displacement of Kannagi Nagar's residents, Sarode's mother-daughter duo, placed amidst the waves is shown looking upwards and surrounded by iris flowers - symbolizing the essence of hope in possibly traumatic situations."

Another completed mural at the site features two smiling sisters. Created by Chennai-based artist A-Kill, it is dedicated to the "core spirit of Kannagi Nagar", which the artist felt was characterised by its young people.

Meanwhile, 'The New Door' by artist Antonyo Marest is a veritable kaleidoscope of colours and geometric patterns. "Spanish artist Antonyo Marest's piece in Kannagi Nagar has been created as a 'new door', metaphorically alluding to the artist's wish for the community to live a better and sunny future," wrote St+art India Foundation while sharing photos of the mural on Saturday.

Works-in-process at the site include a mural that celebrates the "livelihoods of women in Chennai's fisherfolk communities" and a piece inspired by the colours of an oil spill.

According to Architectural Digest, the artists involved in the large-scale project, besides painting murals, are also engaging with the community by hosting classes, workshops and tours. The aim of the project is to change perceptions about Kannagi Nagar and encourage more people to visit the locality.

What do you think of Kannagi Nagar's transformation? Let us know using the comments section.