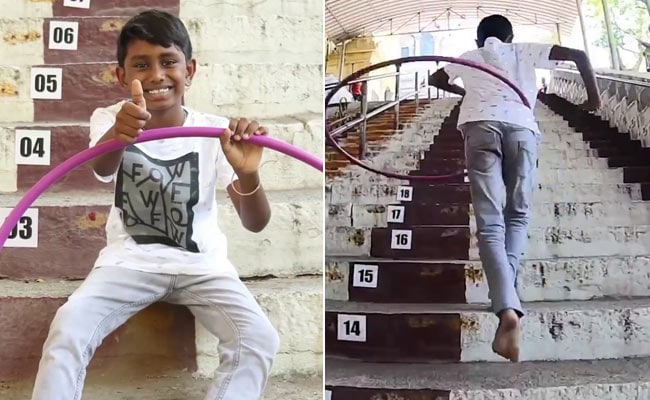 Talent and skill have no age. Proving this to the world is Aadhav Sugumar, a child from Tamil Nadu. At a young age, Aadhav has a world record to his credit. The Chennai boy has broken the Guinness World Record for being the fastest person to climb 50 steps while hula hooping. While many of us may feel tired by just thinking of climbing a long flight of stairs, Aadhav managed to pull off the feat in all of 18.28 seconds.

According to a post on the official Instagram account of the Guinness World Records, he managed to swiftly climb the first 38 steps, and then made a quick run through a courtyard before climbing the next 12 steps. The entire episode was caught on camera and showed Aadhav pulling off the feat effortlessly. Along with the video, the caption read, “Fastest time to climb 50 stairs whilst hula hooping. 18.28 secs by Aadhav Sugumar.”

It came as no surprise that Aadhav's achievement was celebrated by social media users. Among many admirers of the child was the famous British adventurer and Man vs Wild star Bear Grylls. Replying to the post, the TV presenter wrote, “Well done Aadhav!”

Several other users, too, were impressed with Aadhav's achievement. One user said, “I don't think I can climb 50 stairs in 18 seconds even without the hula hoop.”

“I can't even get up 10 stairs without needing a break. Good job kid!” read another comment.

"Me falling on the first step,” confessed another user.

One user wrote, “Respect,” while several others left fire emojis in the comment section.