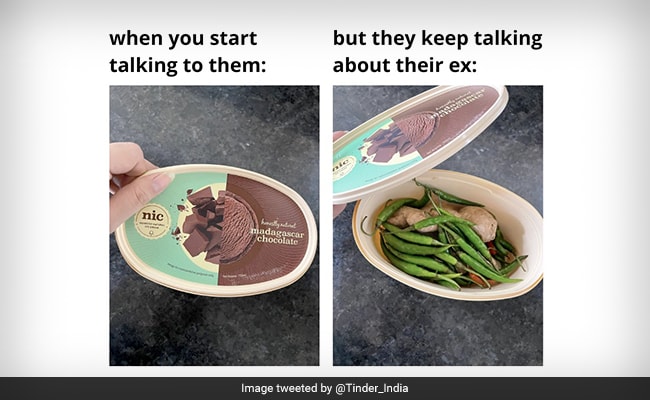 When it comes to rib-tickling memes and jokes, topics like love and relationships always top the trending list. What better than Tinder to share a meme on love life? The dating application has shared a hilarious picture that triggered a full-fledged meme fest on Twitter.

The meme features an ice cream tub with a person about to take its lid off. “When you start talking to them,” the text above the picture read. Next to it, is another picture where the person takes the lid off to reveal green chillies, ginger, and lemon inside the tub instead of some delicious ice cream. “But they keep talking about their ex,” the text above it read.

The meme garnered thousands of likes on the social media platform and prompted users to churn out their own version of the meme.

For many, the meme was a perfect way to express disappointment over something.

A user wrote, “When you first met him Vs When you get to know him.”

When you first met him Vs When you get to know him pic.twitter.com/TsRNGn5JEf

Another dedicated the meme to intrusive relatives.

Replying to the meme, Tinder made its contribution by writing “crush's "what are we" relative's "aage ka kya socha hai"

“When they are your crush. When you get to know them,” a user wrote.

When they're When you get
your crush to know thempic.twitter.com/uYOlkqyPcs

Another person commented, “Boys assignment a day before submission”.

This one highlighted how things aren't always what they appear to be.

“Life before marriage Life after marriage” another one-liner read.

Some users put their creativity to use and gave a relatable tweak to the meme.

the package the in hand salary. pic.twitter.com/3W4qhFs0Bn

Even Edtech company Testbook offered its own hilarious twist to the meme.

When you do group After that your
study performance in
exam pic.twitter.com/8hlGhZTAlY

So, what is your twist to the hilarious meme?