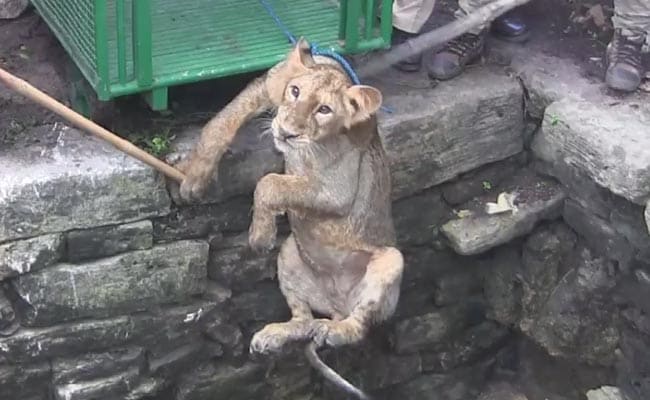 The lion cub was rescued on Saturday morning.

A lion cub that fell into an 80-feet-deep well in Gujarat's Gir region was rescued after a six-hour-operation on Saturday. The incident took place when a two-year-old female lion cub fell into a well near Amrapur village in the Gir Somnath district late on Friday night. She was found on Saturday morning by villagers who immediately informed the wildlife department officials. A rescue team that was rushed to the village managed to pull the cub out without any major injuries.

Watch the rescue below:

According to the wildlife department officials, the cub probably wandered away from her pride and fell into the deep well on Friday night.

Promoted
Listen to the latest songs, only on JioSaavn.com
A video shared by ANI on Twitter also shows how a forest official was lowered into the well to help fasten a rope around the cub to pull her out.

The cub has now been shifted to a forest department centre and will be released back into the wild once she's deemed fit and healthy.Click for more trending news

Good Samaritan Jumps Into Water, Saves Toddler Who Fell Out Of Car