"The alligator hit the kayak so hard, I lost my balance and started to roll." 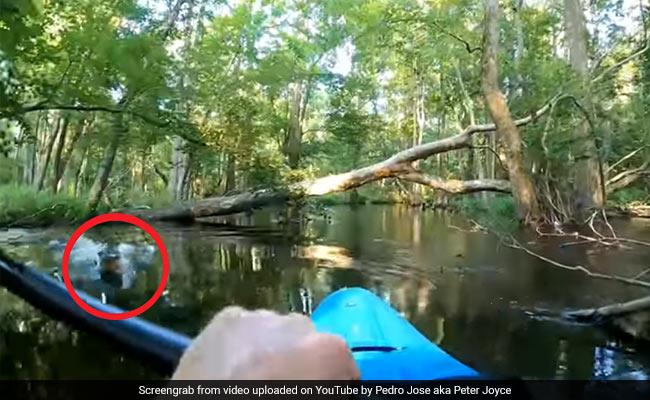 Heart-stopping footage shows an alligator charging at a kayak.

A kayaker in North Carolina got a heart-stopping surprise on Sunday when an alligator slammed into his kayak and flipped it over. Pete Joyce was paddling in a swampy section of the Waccamaw River when the reptile charged at him, reports CNN. Though he is an experience kayaker, Mr Joyce was knocked into the water by the force of the impact.

Luckily, he grabbed hold of some branches near the bank and managed to prevent his boat from getting flipped upside down.

A video camera he was wearing on his chest recorded the whole scary encounter. Peter Joyce posted a 2-minute video of the attack on YouTube noting: "While paddling the upper Waccamaw in N.C. I received a warm welcome from the wildlife."

The video shows him paddling peacefully when, seemingly out of nowhere, an alligator appeared to his left and charged at the kayak. Take a look at the encounter below:

"I was just about to turn around when it came towards me," Mr Joyce, 46, said according to NBC News. "The video doesn't show how hard the impact was. The alligator hit the kayak so hard, I lost my balance and started to roll."

He added that the encounter did not end there - he felt the alligator under the kayak and hit it three times, hoping it would scare the reptile away as he climbed back in.

Footage of the scary alligator attack has gone viral with over 6 lakh views and a number of stunned comments.

"That must have been the longest couple of seconds under water of your life!" wrote one person.

Alicia Davis, an alligator biologist with the North Carolina Wildlife Resources Commission, told CNN that alligators tend to be more active this time of the year because mating season is over and females are guarding their nests.