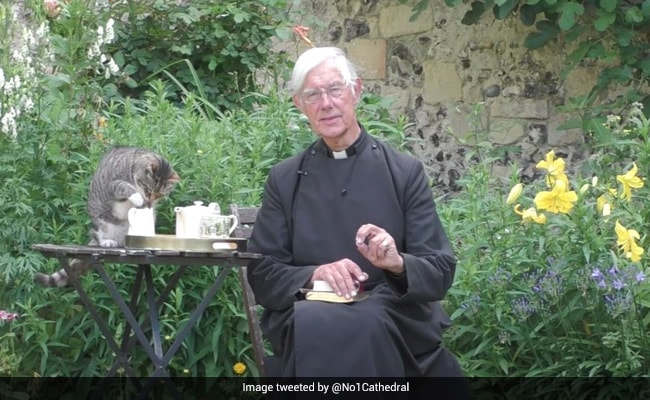 Canterbury tales? It's more like Canterbury tails. For the second time during the pandemic, a cat stole the show as the Dean of Canterbury livestreamed morning prayers for viewers. The Canterbury Cathedral in the UK has been broadcasting services online since places of worship were shut down during the coronavirus-induced lockdown in the country in March, reports the Evening Standard.

On Monday, one of the four cathedral cats was filmed stealing some milk as Dr Robert Willis, Dean of Canterbury, was leading a service via video. Tiger the cat was first recorded sipping something from a bowl kept on the ground for him. After that, the cat jumped onto a chair besides the Dean before eventually hopping onto the table, where it dipped its paws into a jug of milk and began licking them.

Take a look at the hilarious moment in a video shared by the Cathedral on Facebook below:

The Cathedral also tweeted a link to the sermon, writing: "Join Dean Robert - and Tiger - for today's Morning Prayer from the gardens of Canterbury Cathedral."

I wonder if that cat got its full quota of milk for the day!

According to Daily Mail, Tiger is one of the four cats that live at the Canterbury Cathedral. Before this, it was Tiger's nephew, Leo, who had upstaged the Dean by disappearing under his robes during a sermon. The clip had become a huge hit online, collecting thousands of views on social media.

What do you think of the Canterbury Cathedral cats? Let us know using the comments section.

You Have 15 Seconds To Find The Snake In This Pic. Ready, Steady, Go...