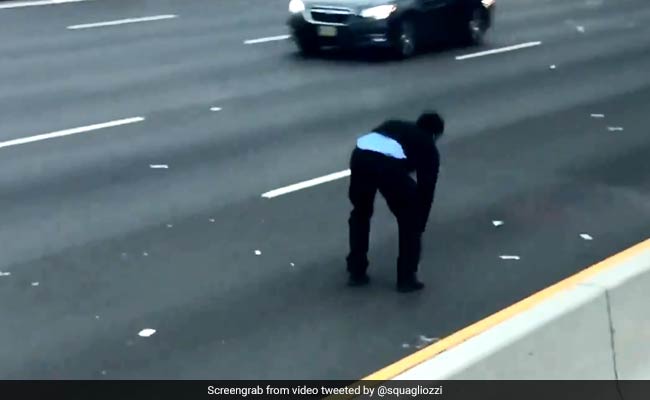 Videos on social media show people leaving their cars to collect the cash.

A cash spill in New Jersey on Thursday morning led to massive chaos and multiple crashes as people attempted to grab the money. The East Rutherford Police Department says that they received reports of an armored Brinks truck spilling cash on Route 3 at about 8.30 am. "Motorists exited vehicles attempting to remove cash causing multiple MV Crashes," they said in a tweet.

According to Fox News, the incident took place near Metlife Stadium, right outside of New York City.

Various videos circulating on social media show drivers leaving their cars to pick up the cash that flew out of the truck.

"Early Christmas for NJ commuters!" wrote Twitter user Sabrina Quagliozzi while sharing a video that shows people picking up cash from the road.

Early Christmas for NJ commuters! It was raining on Route 3!! @njdotcom@ABC7NY@News12NJ#commutepic.twitter.com/oNC7bs3fZz

Brinks Truck accident on Rte 3 near Lincoln Tunnel. Bills scattered all over Hwy. Brinks guy and other drivers stop traffic and scramble for bills. #CantMakeThisUppic.twitter.com/8cI0pX6qLR

Police is now urging people who took cash from the scene to return the money.

"It's theft of mislaid property," East Rutherford police Detective Lieutenant Mike Gianscaspro told WABC-TV. "So we're not looking to charge anybody, we're just looking to get the money back to Brinks."

Police say the truck had an issue locking one of its doors, and an audit is now being conducted to determine how much money was lost when the doors came open.