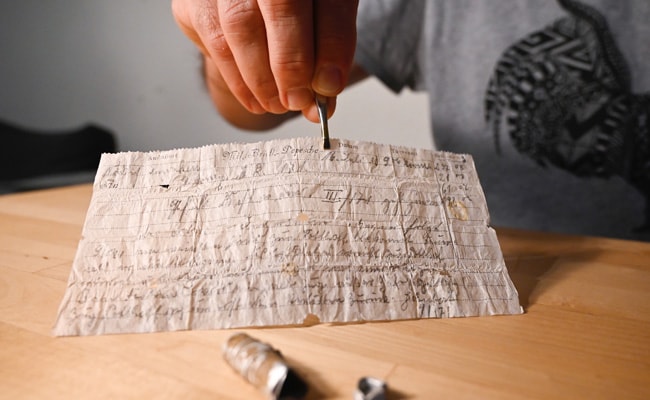 A message probably lost by a carrier pigeon in 1910 (AFP)

A couple out for a walk in eastern France have discovered a tiny capsule containing a message despatched by a Prussian soldier over a century ago using an ill-fated carrier pigeon.

The message from an infantry soldier based at Ingersheim, written in German in a barely legible hand, detailed military manoeuvres and was addressed to a superior officer, said Dominique Jardy, curator of the Linge Museum at Orbey in eastern France.

At the time, Ingersheim -- now in France's Grand Est department -- was part of Germany.

A couple found the tiny capsule with its well-preserved contents in September this year in a field in Ingersheim, said Jardy, who raved about the "super rare" discovery.

They brought it to the nearest museum, the one at Orbey dedicated to one of the bloodiest battles of World War I, from 1914 to 1918.

Jardy had enlisted the help of a German friend to decrypt the message, he said.

The tiny piece of paper and capsule will become part of the museum's permanent display.