Caption This: Giant Alligator Takes a Stroll on a Golf Course 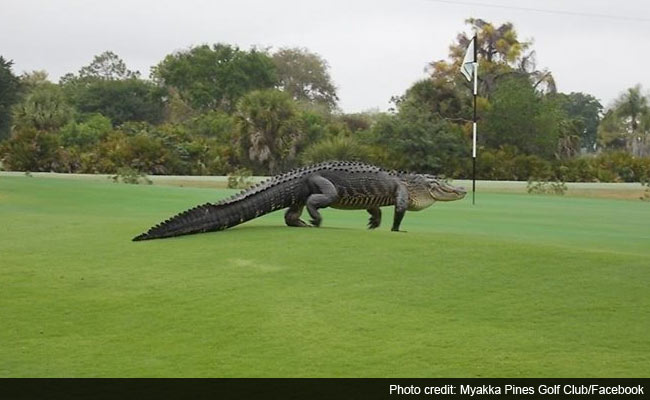 On March 8, a gigantic alligator took over a golf course in Florida and the golfers present did what any sane person would do - quickly click a few photos. Myakka Pines Golf Club, where the photo-op took place, posted some of these pictures on its Facebook page, causing the Internet to be hit by mild tremors.

Some of the Twitterati had this to say:

Every time I close my eyes I see that Godzilla looking alligator smh.

Another reason never to play golf! "@mashable: Massive alligator on a golf course in Florida: http://t.co/aDsZbOwkEvpic.twitter.com/VzdynTOQlS"

Forgot to mention that the giant, golf-course-invading alligator shot a better round than Tiger Woods. pic.twitter.com/MLbIOYlMxU

Although there were rumours of the pictures being Photoshopped, they were quelled soon enough as patrons present in the club confirmed the gator sighting.

Today I've lost two golf balls to an alligator and an owl protecting its nest. #MotherNature

This picture was taken at a local golf course. Many people think the photos are fake. I can assure you they are real. http://t.co/S10FD5nFdK

"We have a lot of alligators around here because there are no houses for miles and it's just open swamp land," she said. This particular gator is believed to be about '12 or 13 feet' long but it isn't the biggest one to have called this golf course its home.

"We had one that lived here for years, his name was Big George, who was probably 15 feet long," Ms Zada said.

Golfers, when faced with the prospect of a strolling past a sunbathing gator, either wait for it to pass or move elsewhere themselves. Dick Huber, whose pictures of the gator are doing the rounds on social media, told ESPN.com, "You don't move them, they move you. You have to respect where they want to go."

#Okaythen. Remind us to stay away from golf courses in Florida.

How would you caption these pictures? Tell us in the comment box below.