The video features Tanya Wells, a British artiste who is trained in Hindustani classical vocal 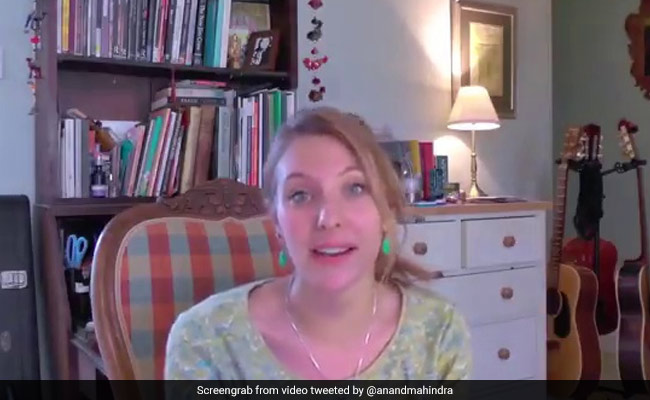 An old video of a British singer performing a ghazal has taken the Internet by storm. The video, which is actually five years old, resurfaced on social media thanks to industrialist Anand Mahindra, who shared it on Twitter this Monday. It features Tanya Wells, a British artiste who is trained in Hindustani classical vocal, singing 'Gulon Mein Rang Bhare'. The ghazal, written by the renowned poet Faiz Ahmad Faiz, was composed by Pakistani singer Mehdi Hassan in 1964.

Tanya Wells' soulful rendition of the famous ghazal left many impressed, Mr Mahindra among them. "A five year old video by British artiste Tanya Wells but I heard it for the first time today," he wrote while sharing the clip. "Kitni nazakat hai inki awaaz mein (There's an elegance in her voice)," he said.

Mr Mahindra added that the video had changed the quality of his morning. "If this is what globalisation is, then bring it on..." he concluded.

A five year old video by British artiste Tanya Wells but I heard it for the first time today. Kitni nazakat hai inki awaaz mein. It changed the quality of this morning...If this is what globalisation is, then bring it on... pic.twitter.com/67XCZkujHf

Since being shared on the microblogging platform one day ago, the video has racked up nearly 60,000 views and hundreds of retweets.

"Tanya leaves one awestruck with her perfect Urdu diction," wrote one commenter.

True ! Superb melody ! Ghazal singing is a tough job and Tanya leaves one awe struck with her perfect Urdu diction , soulful voice and the ease with which she delivers this gem .

Very beautiful, and thanks for sharing. 'chale bhi aao ke gulshan ka kaarobar chale' is so difficult to translate... Maybe 'come along so the garden will flourish' would be better... #faizahmedfaiz

A number of people also praised the singer's voice as melodious and striking.

Wow treat to ears. Beautifully sung and what a melodious voice

This is both soothing and melodious at the same time 🎶

Tanya Wells is a British-Swiss citizen who spent several years in India as a child. Trained in Hindustani classical vocal, she has performed at venues across the world with her band Seven Eyes. Last year, a video of her singing a Sufi classic on the streets of Dubai had also gone viral on social media.