Blogger Tries To Eat Octopus Alive, It Latches Onto Her And Fights Back 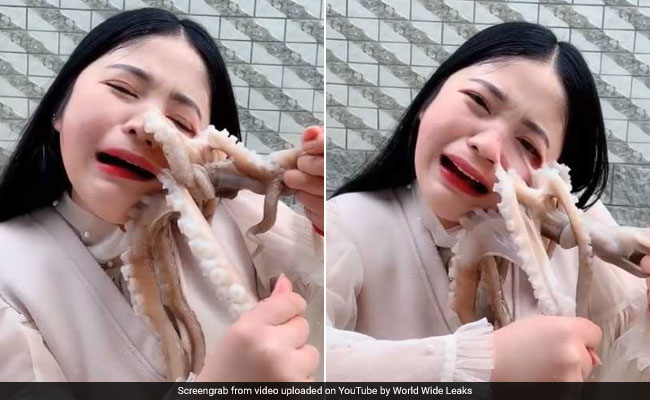 A woman in China was left horrified after an octopus latched itself onto her face.

A Chinese blogger was left horrified after her meal turned on her and nearly ripped her face off. A video that has gone massively viral online shows a live-streaming host trying to film herself while eating an octopus alive. Unluckily for her, the octopus decides to fight back and latches itself onto her face, leading to a painful few minutes as she tries to pull it off.

The video shows the woman screaming in pain as she tries to remove the sea creature's tentacles off her face. In the end, as she pulls desperately and her lower eyelid stretches to a horrifying degree, she does manage to get rid of the octopus.

But it's safe to assume that the blogger - a live-streamer on the Chinese photo sharing app Kuaishou - won't be eating live octopus again in a hurry. According to Daily Mail, the incident left her with a small wound on her cheek.

An octopus typically uses its tentacles to defend itself or catch prey.

The video was first shared on Chinese social media platforms like Weibo, and went viral from there. It has collected millions of views online. Many have criticised the woman for trying to eat the octopus alive.