"A rainbow-like halo has encircled the sun in a perfect circle right now," wrote actor Samyukta Hornad, sharing pics of the optical phenomenon. 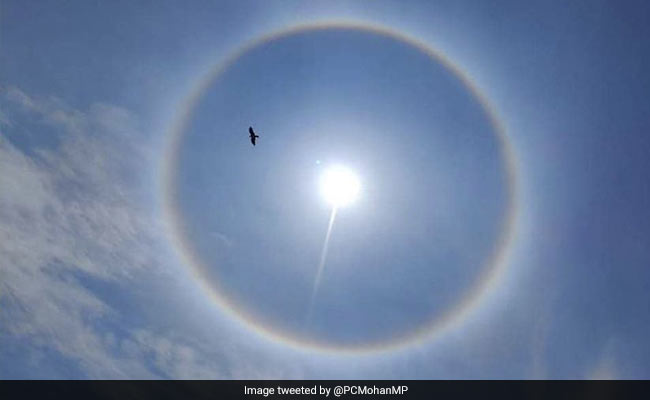 Pics of the 'sun halo' are going viral on social media.

Bengaluru residents today witnessed the rare sight of a rainbow-coloured ring around the sun. Residents of the city were left marvelling as the 'halo' appeared around the sun on Monday morning. The striking circular rainbow was reportedly visible from most parts of the capital of Karnataka. It was first seen around 11 am and lasted for over an hour, in which time Bengaluru residents flooded social media with pics of the rare phenomenon.

"A rainbow-like halo has encircled the sun in a perfect circle right now," wrote actor Samyukta Hornad, sharing a picture of the sun halo. She further explained that the ring formed because of light interacting with ice crystals in the atmosphere.

A rainbow-like halo has encircled the sun in a perfect circle right now.
Call it magic, call it true :)

The phenomenon is called a halo n happens because of light interacting with ice crystals in the atmosphere. Owing to its radius around the sun
☀️ ???? ⛅️ ????#Bangalore#Sun ???? pic.twitter.com/QVnM44y1rS

Take a look at some of the pics that are going viral on Twitter:

The #Bengaluru sky is always up to something!

This time it is the sun doing a fancy ring thing.

Why should clouds have all the fun?! pic.twitter.com/rVYplr6w9h

A ring of rainbow forms around the Sun through a phenomenon called Halo that happens because of light interacting with ice crystals in the atmosphere. morning views of sky in #Bangalorepic.twitter.com/9YdhfHreKx

This is just wow Sun halo in City ❤️ #Bangalore#Sunpic.twitter.com/krX0Wr3AMN

Even the sun is social distancing, joked one Twitter user.

Meanwhile, in Bangalore, even the sun is “social distancing” with a little halo to protect it! pic.twitter.com/Auz9O9Mlp7

Although the phenomenon is rare, it is not unheard of. Some Twitter users dug up old photographs of sun halos, as seen before in other parts of the country.

"Such Sun or Moon halos are not so common however they have been witnessed earlier in the country in the past," tweeted senior IFS officer Ramesh Pandey.

Banglore city witnessed today a rainbow ring around Sun. This phenomenon is called ‘22 degree Sun Halo'.
Such Sun or Moon halos are not so common however they have been witnessed earlier in the country in the past. #banglore#sunhalopic.twitter.com/JeLfHp7AE3

Sun halo, also known as '22 degree halo', is an optical phenomenon that occurs due to sunlight refracting in millions of hexagonal ice crystals suspended in the atmosphere. It takes the form of a ring with a radius of approximately 22 degrees around the sun or the moon.

This 76-Year-Old Grandmom Is Nailing The Instagram Fashion Game