Bears At Temple, Once Dependent On Prasad, Search For Food Amid Lockdown

In Chhattisgarh, bears look for food amid the coronavirus lockdown. 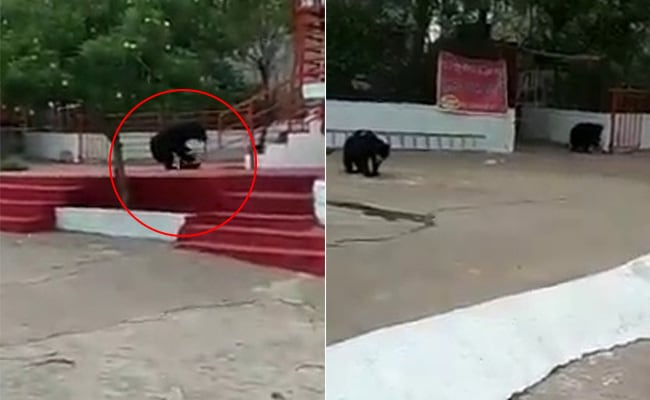 A bear rifles through a dustbin looking for food in Chhattisgarh.

Amid the nationwide lockdown to contain the spread of coronavirus, a heartbreaking video that shows bears searching for food has emerged online. The video shows one hungry sloth bear rifling through dustbins at a temple in Chhattisgarh looking for something to eat, while another stands some distance away.

Footage of the bear was shared on Twitter by Arpit Mishra, an official in the forest department of Madhya Pradesh. While sharing the nearly two-minute-long video, Mr Mishra explained that the sloth bears had been dependent on the food or prasad (religious offering) that devotees at the temple gave them. With the lockdown shutting down all religious places and banning any public gatherings, the bears had been left without a source of food - forcing them to search dustbins for something to eat.

In the clip, one bear is seen repeatedly banging the dustbin on the ground, apparently looking for food. "As temples are closed, sloth bear dependent on prasad & food stuff given by devotees are now angry and looking for it in dustbin around temples," wrote Mr Mishra while posting the video on the microblogging platform.

Video from Chattisgarh
As temples are closed . Sloth bear dependent on prasad & food stuff given by devotees are now angry and looking for it in dustbin around temples. @pradeepifsmp@RandeepHooda@deespeak@minting99@anilkumble1074@BittuSahgal @ pic.twitter.com/qE9Z92kcv7

"Local authorities should arrange foods for them," wrote one Twitter user in the comments section, while another supported the suggestion.

Many stray animals - once dependent on locals - have been left without food and water amid the 21-day nationwide lockdown that was imposed to contain the spread of the highly infectious coronavirus. A few days ago, Karnataka Chief Minister BS Yediyurappa had shared an appeal on Twitter, asking people to feed stray dogs, cats and birds around their home.