"The fact that he's smiling is perfect," wrote one Facebook user 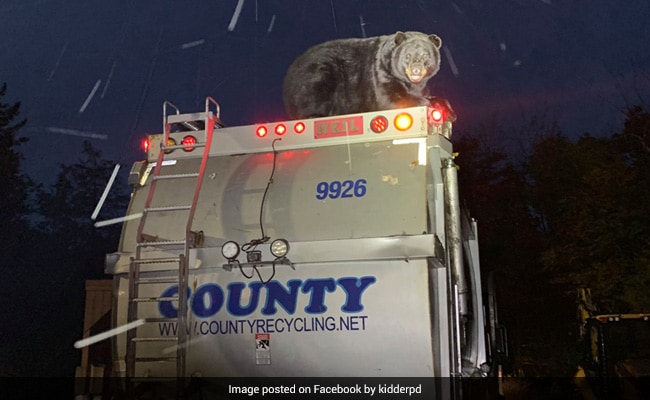 A bear takes a ride on top of a garbage truck.

Police in Pennsylvania recently received a complaint about a bear, but they did not have to go far to catch it. The animal was obliging enough to hitch a ride to the police station on a garbage truck.

The Kidder Township Police Department posted photos of the black bear riding the truck on Facebook, where they have gone viral with thousands of amused comments and reactions. The fact that the bear appears to be enjoying the ride - its face seems stretched into a smile in two of the photographs - has contributed to the post's popularity.

The police department in Carbon County said that bear sightings in the area had increased.

"We can only assume it was sick of going for the small, small amount of trash in the garbage pails and went for the big prize," Officer Vincent Murrow of Kidder Township Police Department told WNEP-TV. "It's been pretty frequent, almost daily that we're getting a new bear complaint in the area," he added.

Since being posted earlier this week, the post has collected over 14,000 'shares' and more than 700 amused comments.

"This is Hysterical.....And great!! The fact that he's smiling is perfect," wrote one Facebook user in the comments section.

"He has been preparing for this garbage truck high jacking for years. Finally nailed it," another quipped.

"The fact he's smiling, he deserves that truck," another remarked.

Police said that the bear made its way down safely after the truck was backed to a tree.