"He just hung out on the counter where it was cool, and literally went to sleep." 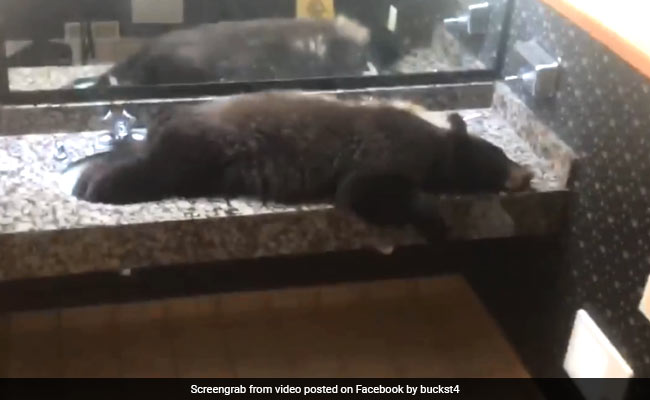 Hilarious footage of the young bear napping has amused many.

Hotel workers in Montana, USA, were recently shocked to discover an uninvited guest on the premises - a bear resting in the women's washroom. Buck's T-4 Lodge and Restaurant, adjacent to a national forest, is often visited by wildlife, according to Fox News. However, the hotel's co-owner and general manager David O'Conner said that a "bear stuck in the bathroom" was a first, even for them.

On Monday, the lodge shared a video of the young bear sprawled out on the washroom counter, apparently unfazed by the commotion he caused.

"A yearling black bear found its way through a window into the ladies' room," they wrote. "Huge shoutout to Gallatin County Sheriff's Office and Montana Fish, Wildlife & Parks for keeping our guests safe."

The video shows wildlife officials tranquilisng the bear and carefully carrying it outside as curious guests mill around for pictures.

"The bear wasn't able to get himself back out as the window was too high, but he was real comfortable there. He just hung out on the counter where it was cool, and literally went to sleep," said David O'Conner to CNN. "Once the bear was tranquilized and asleep, (wildlife officials) checked its vitals, did some basic medical checks to make sure he was healthy, and healthy enough to be transported," O'Connor said.

The video has gone viral with over 68,000 shares on Facebook. Footage of the bear sleeping has inspired a ton of amused reactions.

"He was looking for Goldilocks," wrote one commenter. "He just wanted a tasty meal and a comfy bed to stay in for a night," said another. "He was just so relaxed; all laid out on the sink counter," a third commenter added, while a fourth joked: "He just wanted a nap."