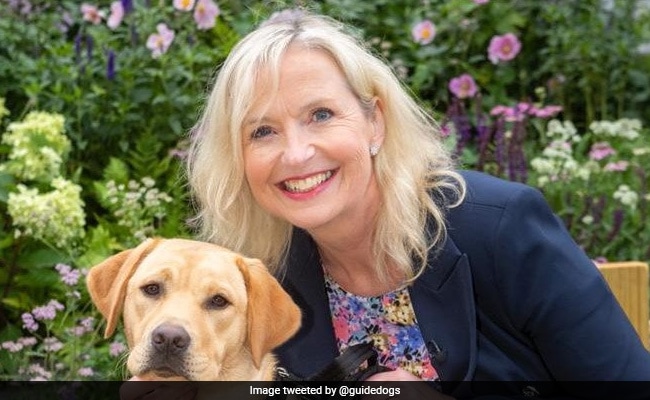 Carol Kirkwood with Flash, the dog.

Live television can give us unexpected funny moments, and that's just happened with BBC journalist Carol Kirkwood. Ms Kirkwood, a BBC weather presenter, was pulled over by her guide dog during a live telecast on Monday morning. The video has been shared by the media house and Ms Kirkwood herself. There we see Ms Kirkwood holding the Labrador by its leash. Just as she signs off, the dog decides to hurry beyond the scene. In the process, it pulls down the reporter who falls on her face right in front of the camera.

Ms Kirkwood was reporting from the Chelsea Flower Show when the incident happened.

After Ms Kirkwood pulled herself up, the presenters asked her if she was alright. To that, she replied, "Yes, yes. She's a very strong girl, Flash."

Show presenters and Ms Kirkwood laughed off the funny incident.

Ms Kirkwood shared the video on Twitter and wrote, "Flash!"

BBC's caption to the video is, "Flash the guide dog is running the show on BBC Breakfast this morning."

Flash the guide dog is running the show on #BBCBreakfast this morning ???? https://t.co/g98lIxe3Fapic.twitter.com/6ym3obw6Tz

The video has been viewed more than 1 lakh times on Twitter. The incident was funny as well as adorable for many users. Labrador owners could relate very well.

One such user, Esther Frisby, wrote, "That's the most graceful face plant ever and a typically gracious reaction! Being the proud owner of a 9 month Labrador- I experience it on a daily basis."

That's the most graceful face plant ever ????????and a typically gracious reaction! Being the proud owner of a 9 month Labrador- I experience it on a daily basis ☺️ pic.twitter.com/5M804SBVDs

Betty Redondo, another BBC journalist commented on the dog's name and her behaviour, "Flash by name - flash by nature!"

Flash by name - flash by nature !

"Really, hope you're ok. And you still end up smiling, Carol, you are always the professional," wrote a user named Catherine Corkery.

Really hope you're ok. And you still end up smiling Carol you are always the professional. Can see where “Flash” got his name ????

A user, Aby Vee, applauded her for “being such a good sport”.

Couldn't have happened to a nicer person ???? sorry and well done for being such a good sport!

Users were also concerned and asked Ms Kirkwood if she was really okay.

Such a professional…it's as if it hadn't happened. Hope your knees are ok !

Flash passses on her sincere apologies ????????

We don't doubt that Flash is getting famous very soon.