The fake currency comes with the promise of "sum of five hundred coupens" (yes, misspelled like that), not rupees, to the "barer". 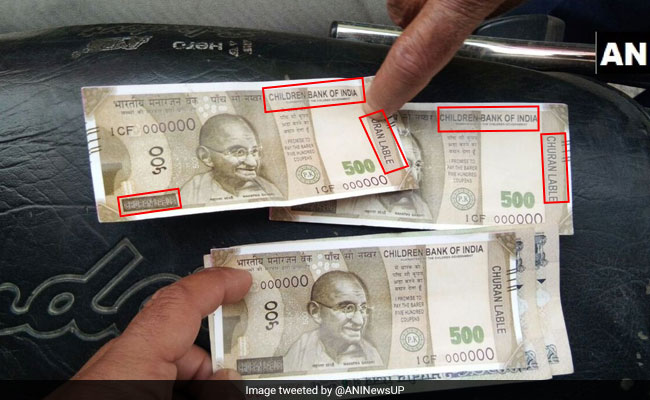 New Delhi: Bareilly resident Ashok Pathak was in for a rude shock when the cash he withdrew from an ATM happened to include a fake Rs 500 note. Yes, the infamous 'Children Bank of India' one. On Sunday evening, the man claimed he withdrew Rs 4,500 from a United Bank of India ATM in the city's Subhash Nagar area, only to find a fake Rs 500 note among the dispensed cash.

The note looks strikingly similar to the ones issued by the country's central bank, barring a few details. Instead of Reserve Bank of India, the Rs 500 note says "Children Bank of India". The official mark on bottom left is replaced with the text "Churan Lable". The fake currency comes with the promise of "sum of five hundred coupens" (yes, misspelled like that), not rupees, to the "barer". Not the governor, it comes bearing a "PK" stamp.

Mr Pathak said he wasn't the only victim to get fake currency.

"I flashed the fake note in front of the ATM CCTV and informed some people. Another person named Pradeep Uttam walked in and withdrew Rs 2,000 from the ATM. I asked him to check the cash he had just withdrawn. There were two fake Rs 500 notes," Mr Pathak told news agency ANI.

When a third customer, identified as Indra Kumar Shukla, walked in and withdrew money, he too received a fake Rs 500 note from the ATM. It was a video of him withdrawing cash and getting a fake note that went viral on social media.

The three men have registered a formal complaint with the branch manager of the bank.

"We have submitted photocopies of the ATM receipt and the fake notes to the manager. The manager said they will take up the matter with higher authorities," said Mr Pathak.

The bank manager told The Times of India that the task of depositing cash in ATMs lies with third-party agencies and not the bank itself.

Promoted
Listen to the latest songs, only on JioSaavn.com
"We checked all currency notes in the ATM on Monday and did not find any fake ones. I have sent a report to our head office in Calcutta to blacklist or take action against the agency, which is tasked with depositing cash at ATMs. They must have replaced some of the currency notes and it was an embarrassment for the bank," Bacchan Shah told TOI.