In his Spider-Man costume, he is seen sitting at his desk, answering calls, helping a co-worker and even stretched out on a table in one case. A banker showed up in a Spider-Man costume for his last day of work.

A banker in Brazil made sure that his last day at work was a memorable one by showing up dressed as Spider-Man. Pictures and videos going viral online show the man, who has not been named, dressed up as the fictional superhero. In his Spider-Man costume, he is seen sitting at his desk, answering calls, helping a co-worker and even stretched out on a table in one case. 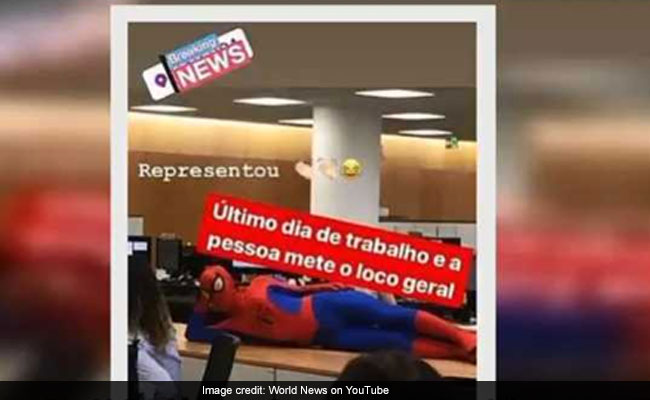 Daily Mail reports that the pictures were shared on Instagram by his colleague Walter Costa, and have since gone viral. The incident took place at a Sao Paulo bank, whose name has not been disclosed.

A video of 'Spider-Man', posted on YouTube on Wednesday, has gone viral online. It shows the friendly superhero walking around the worplace and handing out candy to co-workers.

Since being shared online, the video has collected over 98,000 views.

"The hero of the neighbourhood," laughed one person in the comments section. "He's talented," wrote another.

What do you think of this banker's stunt? Let us know using the comments section below.