"What's your problem?" Robin Li said to the individual as he walked off stage. 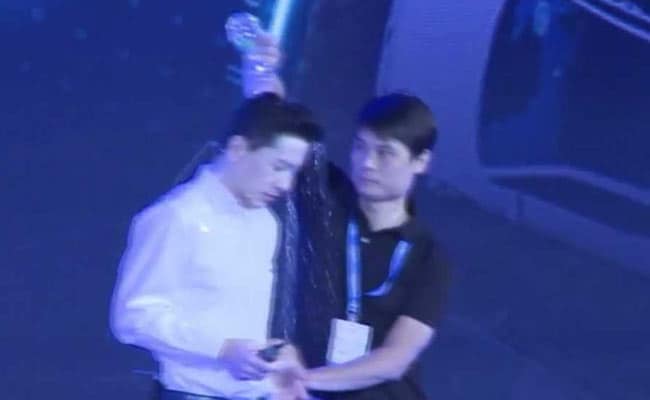 A man burst on to a stage and poured water over the head of Baidu CEO Robin Li as the founder of China's dominant search engine spoke at a company-sponsored event on Artificial Intelligence on Wednesday.

Highly visible public acts of defiance are relatively rare in China's big cities where security measures can be tight and celebrities like Li generally travel with a pack of security.

Baidu has faced enormous criticism in China in recent years after a medical advertising scandal and discontent with changes to its search result listings that favour its own content.

Li was telling the crowd about Baidu's autonomous car development as he opened the two-day tech conference, when the man sauntered up on stage and dumped a bottle of water on his head.

It appeared to catch Li off guard and he stood stunned and unmoving for a second as the water poured down.

"What's your problem?" Li said in English to the individual as he walked off stage.

The incident, which lasted only a few seconds, initially seemed to be part of the presentation until event security intervened to cart off the man.

"Everyone can see that the path of advancing AI will still encounter all types of things we don't expect," said Li, with a wet face and drenched white shirt, while calmly resuming his presentation to applause.

Security for the event started light with few personnel visible in the conference room prior to the incident, but security guards soon filled in to stand at the end of each row of the audience.

Baidu issued a statement the incident that echoed Li's on-stage reaction, but it did not give any details about the individual or what happened to him afterwards.

Baidu has had a rough year posting its first quarterly loss since going public in 2005 during the first quarter, with the head of its core search business also resigning.