Read inOther Languages
This Article is From Oct 09, 2020

This little girl's priceless reaction will make you laugh too. 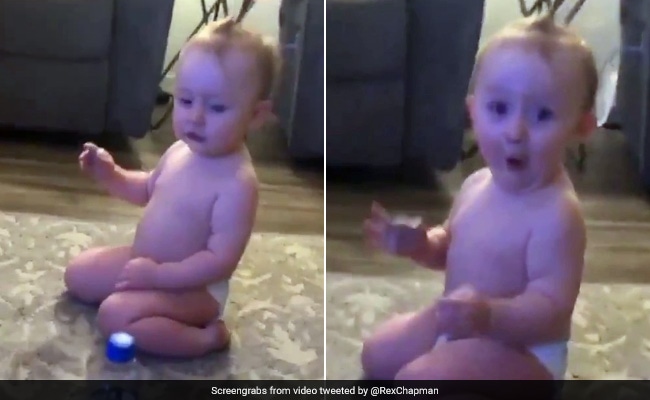 Lylah Rae aces the bottle flip challenge and how!

This might just be the cutest entry to the bottle flip challenge. In April, Rachel Marie Baheza shared a Facebook video of her daughter nailing the bottle flip challenge - an Internet trend in which participants attempt to throw a plastic bottle in such a way that it lands right side up. Ms Baheza's video went massively viral online for the baby's adorable reaction, and it has now resurfaced online again after months.

In the video, the little girl, named Lylah Rae, can be seen sitting on the floor when someone tosses a bottle her way. Laughing, and without even looking at the bottle, the toddler picks it up and flips it absentmindedly. The bottle lands right side up, prompting exclamations of surprise from her family. The little girl's reaction is the best, though. Her mouth hangs open, surprised, before she starts laughing in excitement.

The video was re-posted by former American basketball player Rex Chapman on Twitter yesterday. "Needed this today," he wrote while sharing the short clip. Watch it below:

Since being posted on the microblogging platform, the six-second clip has garnered 9.4 lakh views and over 41,000 'likes'. Many in the comments section said the little girl's reaction was cute, while others praised her bottle flipping skills.

"Just breathtaking to think that at that age she knew to be shocked and delighted when the bottle landed upright," wrote one Twitter user.

"Whoa that face is PRICELESS! Has that 'I can't believe I just did' that mixed with the joy of 'yeah I did that excitement'" said another.