One baby elephant pushes another into water in a prank that has thousands chuckling. 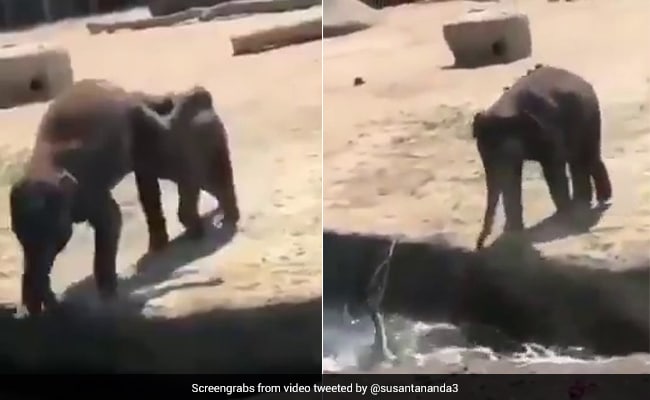 It's Friday! And there's no better way to welcome this much-awaited day than with a hilarious elephant video. Baby elephants are arguably the cutest animals, so when a video features not one, but two baby elephants, you can be sure it's on its way to becoming a viral hit. One such video was tweeted last night by Indian Forest Service officer Susanta Nanda, and it is sure to bring a smile to your face.

The video shows one baby elephant pushing another into water in a prank that has left thousands in splits. Though it's not a new video - it has been circulating on social media for at least two years - the antics of these baby elephants never get old.

Watch the literal embodiment of the hilarious "There can only be one" meme play out below:

Since being shared on the microblogging platform, the video has collected over 37,000 views and a ton of amused comments.

And always when mom is not around to see ????

Meanwhile, this is not the only baby elephant video that is amusing Twitter users. Another one was posted by Mr Nanda yesterday, and has since garnered over 76,000 views. The video shows a playful baby elephant sliding down a hill and is one of many such videos that are circulating on the microblogging platform. Watch:

Game of sliding is inbuilt in children's genes???? pic.twitter.com/JGPBQLNDO2

According to Nature World News, research has found that baby elephant have a teasing and playful side to them that is important for developing social and physical skills crucial for survival.