This Low-Budget Parody Trailer Of Avengers: Infinity War Is Viral

The trailer involves genius use of household items as props - dinner plates for Dr Strange's chakras, breakfast cereal to show battle of Wakanda, cloth pegs for Thanos's infinity stones and what not. 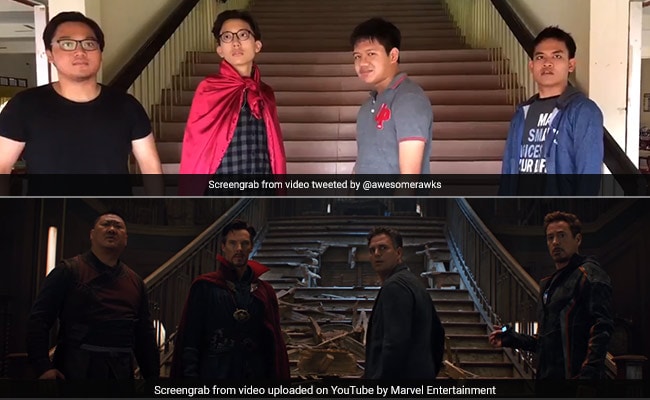 The parody trailer of 'Avengers: Infinity War' has been made a group of college students from Malaysia

New Delhi: Social media is currently going gaga over all things Avengers. Since being released last Friday, the highly-anticipated trailer of Avengers: Infinity War has been the big talking point on the Internet. With 34 million views and counting, the Avengers trailer is comfortably sitting on top of YouTube's trending list for the last five days. The third film from the Avengers series and 19th from the Marvel Comics ecosystem will see the Marvel superheroes, played by an ensemble cast, go against a common enemy - Thanos (played by Josh Brolin) - who wants to wipe out half the universe with infinity stones. Avengers: Infinity War will release on April 27 after a long wait.

Promoted
Listen to the latest songs, only on JioSaavn.com
Since its first trailer back in November, there have been tonnes of reactions, mashups, compilations circulating on YouTube. Joining the frenzy is a gold standard parody of the first trailer of the film. Made by a bunch of Malaysian college students, the production is incredibly low budget but involves genius use of household items as props - dinner plates for Dr Strange's chakras, breakfast cereal to show battle of Wakanda, cloth pegs for Thanos's infinity stones and what not.

The thrifty creators posted their version of the Avengers: Infinity War trailer on Twitter and it has nearly 3 million views and 77,000 retweets in just two days.

Who did it better? @MarvelStudiospic.twitter.com/k504zAadGB

And not surprisingly, Russo brothers, creators of the original, noticed the parody trailer and even invited them to direct the fifth Avengers film.

Aiman. You guys are geniuses. Are you available to direct Avengers 5? https://t.co/8IIS3hacBu

The parody trailer was even picked up by local news channels, as pointed out by another Twitter user.

What do you think of the parody trailer?Click for more trending news