At 'Touch Me Not Pani Puri', a machine uses sensors to dispense flavoured water 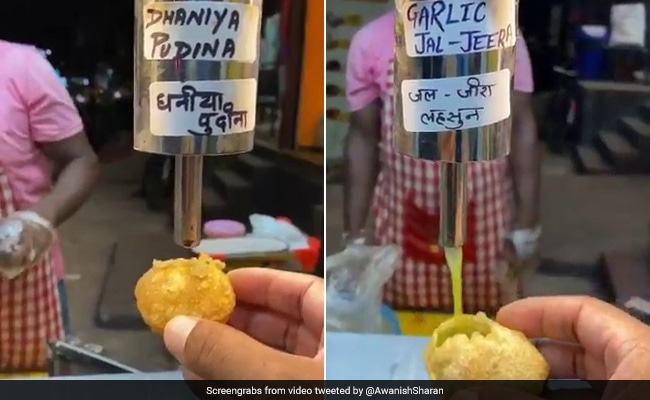 Twitter is all for this automatic pani puri machine.

The demand for gadgets that reduce contact between people has soared during the coronavirus pandemic. Perhaps that is why Twitter is fascinated with a pani puri vending machine that minimises contact between the seller and the customer. Pani puri, puchka, golgappa or pani batasha is a beloved street food. However, with no-contact and social distancing being the new normal, many had been avoiding this snack which is usually assembled at the spot and served, rather than delivered home.

This vending machine may just be the answer to those challenges.

IAS officer Awanish Sharan took to the microblogging platform on Tuesday to share a video of a panipuri shop in Raipur, Chhattisgarh, which has deployed the machine to dispense flavoured water automatically.

The video, filmed at the establishment which is aptly named 'Touch Me Not Pani Puri', shows a customer using the vending machine to sample different flavours of water - garlic, khatta meetha and dhaniya pudina. The machine uses sensors to dispense the flavoured water. Mr Sharan praised it as an amazing "jugaad" or hack in his tweet.

"Automatic Panipuri in Telibandha Raipur," he wrote in Hindi. "Awesome jugaad," he added. Watch the video below:

Since being posted on Twitter a day ago, the clip has garnered 24,000 views and dozens of impressed comments.

"Very nice, will surely visit this pani puri wala," wrote one person in the comments section. "Superb idea," another remarked.

This is not the first innovation that aims to reduce contact between pani puri sellers and their customers. A pani puri vending machine had also gone viral on social media recently.