This Pani Puri Vending Machine Is A Viral Hit. Watch How It Works 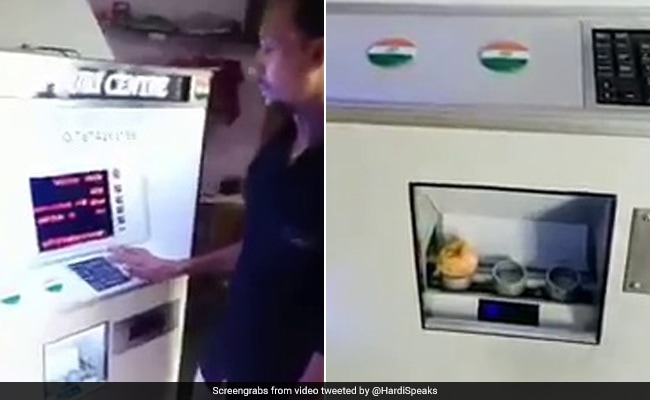 When the lockdown to contain the spread of coronavirus was announced in March, many jokes centred around the unavailability of pani puri flooded social media. Three months later, the jokes are no longer funny and many are truly craving their favourite snack again. In such times, this pani puri vending machine may just be the thing that food lovers need - and it's no wonder, therefore, that it is going viral on social media.

Pani puri, puchka, golgappa or pani batasha is a beloved street food. However, with no-contact and social distancing being the new normal, the popularity of this snack - which is usually assembled and served at eateries, rather than delivered home - has seen a dip. But recently, a video that shows one man demonstrating how a no-contact pani puri vending machine would work has captured social media's attention.

The video shows the machine accepting a 20 rupee bill, after which a tiny conveyor belt holding golgappas appears. The man who demonstrated the procedure also said that the vending machine took six months to develop.

Among the many social media users who praised the innovation was Additional Director General of Police (ADGP), Assam Police, Hardi Singh. "Now this is real Indian ingenuity!" wrote Mr Singh while sharing the video, which has collected thousands of views on Twitter. Take a look:

Now this is real Indian ingenuity!

Call it by any name Gol Gappe, Puchka, Batasa - we love it! pic.twitter.com/wC288b9uUD

Would have laughed at something like this a year ago. Not so much now. Changing perspectives with the changing times

Excellent CONTACT LESS Hygenic Pani Puri Machine DEVELOPED IN INDIA that works like an ATM ???? The buttons can be easily santised. This is sure to be a hit during Corona times ???????? pic.twitter.com/rpZzJ2kWel