In the post, Aman Gupta, co-founder of Boat, says: "Look, it's a 10 crore table. It should have at least two diamonds." 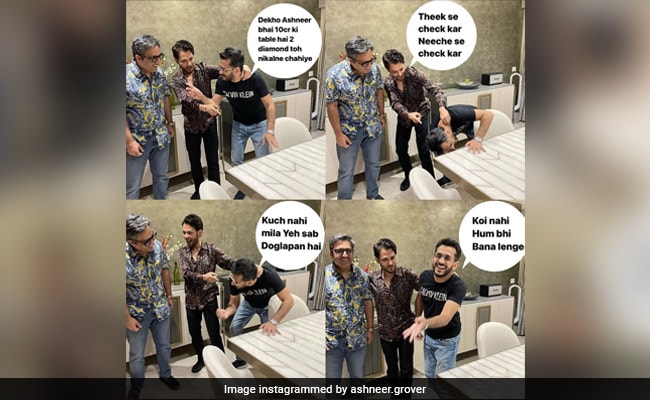 Ashneer Grover took a dig at reports alleging he spent Rs 10 crore on a dining table.

On Saturday night, Aman Gupta and Anupam Mittal had a mini Shark Tank India reunion at Ashneer Grover's house, where the spotlight was stolen by his infamous "Rs 10 crore dining table."

The dining table saga began when reports emerged about the former managing director of BharatPe owning a table worth Rs 10 crore. A Bloomberg report from earlier this month stated that Mr Grover told several employees he had spent $130,000 (nearly Rs 1 crore) on his dining room table. Some news reports after that put the value as Rs 10 crore.

The BharatPe founder denied the allegations at the time, writing: "I don't hold the Guinness World Record for most expensive table ever."

On Saturday, Mr Grover's Shark Tank India colleagues Aman Gupta and Anupam Mittal joined him for dinner at his Delhi house, where the infamous table again became the centre of attention. Mr Grover shared a meme to take a dig at the reports. He shared a series of pictures which show Mr Gupta and Mr Mittal examining the table, purportedly in search of diamonds.

In the post, Aman Gupta, co-founder of Boat, says: "Look, it's a 10 crore table. It should have at least two diamonds."

Sharing the meme on Instagram, Mr Grover wrote: "Thanks @boatxaman and @agmittal for a fun Saturday night. It's amazing how smoothly we pick up from where we left!" He also tagged Shark Tank India in his post, which has received over 1 lakh 'likes' on Instagram.

Earlier this month, Mr Grover had said he would rather invest money in business to create jobs than spend it on a table. "Is it a space rocket? Is it a time machine? No, it's a Rs 10 crore dining table," he wrote, sharing a pic of the table on Twitter.

Is it a space rocket? Is it a time machine? No it's a ₹10cr dining table !! Haha ! I don't hold the Guinness World Record for most expensive table ever. Nor do I intend to. Press - don't fall for BharatPe Board (undisclosed sources) lies - you'll lose your credibility like them. pic.twitter.com/kdONGiMN0Z

"I'd rather put Rs 10cr in business and create employment for 1,000 of folks so that they can earn & put dignified meal on their tables for their families," he tweeted.