"Such a drama king," laughed one commenter 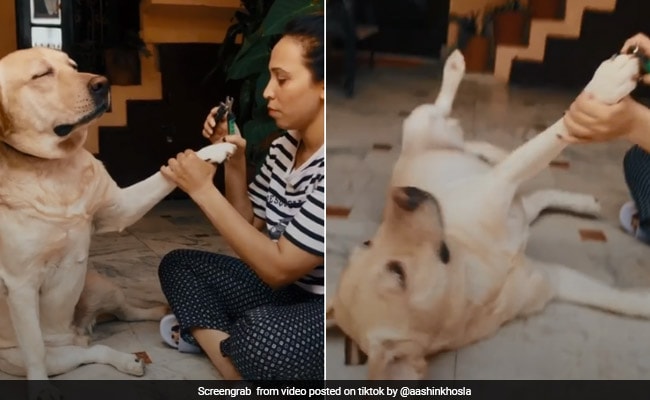 Dogs really hate getting their nails trimmed - and this viral TikTok video is proof. The Internet is a treasure trove of hilarious videos of dogs acting out at the mere sight of nail clippers. Just a few weeks ago, an old video of a dog pretending to faint just to avoid a nail trimming resurfaced and took the Internet by storm, collecting millions of views. That dog seems to have found his match in this melodramatic one, who pretends to faint for exactly the same reason.

A few days ago, TikTok user Aashin Khosla took to the video-sharing app to post a hilarious video of her pet dog dramatically 'fainting' as she tries to trim his nails. In the video, the adorable dog falls backwards as his owner brandishes the nail clippers in an award-worthy performance.

Watch the TikTok video below (it's 'pawsitively' hilarious):

The funny video has collected over 5.8 lakh 'likes' and thousands of comments since being shared online, with people praising the dog's performance.

"Such a drama king," wrote one person, adding laughing face emojis. "I am laughing so hard," said another. "Hats off to the dog's acting," a third added.

Like dog videos? You'll love this ultra-cute video of a dog playing with her stuffed toy.