Over 1.3 million views for this video - and counting 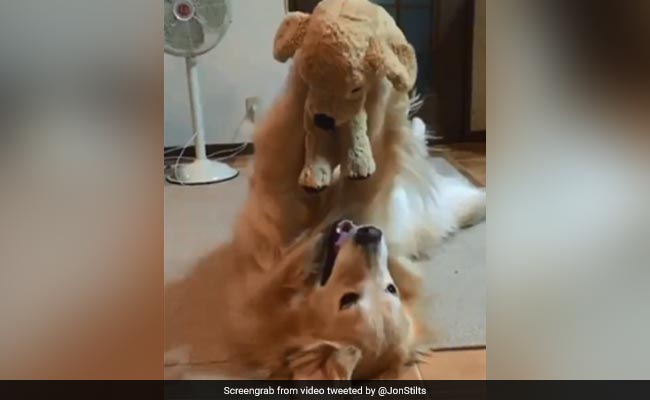 This video of a dog playing with her toy will bring a smile to your face.

An ultra-cute video that has surfaced on the Internet shows a dog playing with her stuffed toy - a puppy. The video shows the golden retriever as she holds the toy up in the air and lovingly tosses it around. Shared by the Twitter account 'Humor And Animals', it has collected over 1.3 million views since being shared online on Monday.

Watch the adorable video below. It's sure to make you smile:

Along with a million views, the video has also amassed more than 27,000 'retweets' and a ton of comments going "aww" over the dog and her toy.

This is making my day so much better!

My puppy loved her duck. 😃 pic.twitter.com/7eku5rwH5S

Picked up this rescue last week. Tough life in a puppy mill but this morning she played for the first time, also with a plush puppy. Life is good! pic.twitter.com/EhYv8KVHqi

The video appears to feature Sadie, an Insta-famous goldie with over 80,000 followers on the photo-sharing app. Sadie and her stuff toy, named Bestie, have a huge fan following. In fact, in 2017, a video of Sadie getting 'jealous' of the toy had gone massively viral online.

There's only 1 good girl here! 🦁 #lookitssadie * Jukin Media Verified * Find this video and others like it by visiting https://www.jukinmedia.com/licensing/view/976482 For licensing / permission to use, please email licensing(at)jukinmedia(dot)com

Let us know what you think of the videos using the comments section.