Anand Mahindra's Team Tracked Down Viral 'Shoe Doctor.' How You Can Help

It took less than two weeks for Anand Mahindra's team to track down a cobbler who went viral for his ingenious marketing skills. The business tycoon first learnt of the "shoe doctor" from a WhatsApp forward. 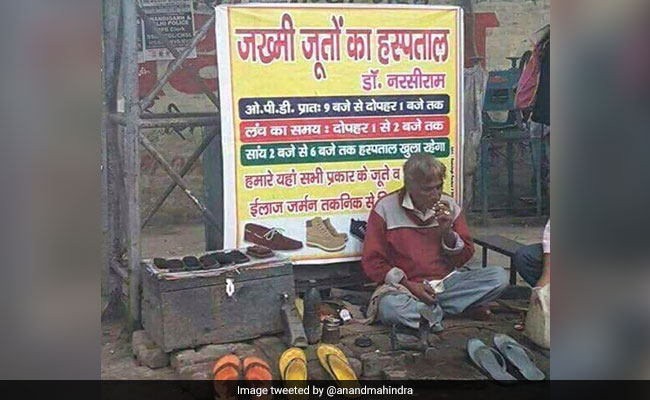 New Delhi: Business magnate Anand Mahindra, who often shares interesting videos and pictures from his "WhatsApp Wonderbox" on Twitter with his 6.7 million followers, just posted a delightful update on a "shoe doctor" he had tweeted about earlier this month. On April 17, the Mahindra Group chairman had tweeted a photo of a cobbler who he said "should be teaching marketing at the Indian Institute of Management." Less than two weeks later, his team managed to track down the man in Haryana and are working to help him out in the best way possible.

The 62-year-old business tycoon first learnt of the "shoe doctor" from a WhatsApp forward. The photo he tweeted shows an old man surrounded by footwear. The board behind him advertises the shoe repair shop as a "hospital" for "injured" shoes, listing Dr Narseeram as the doctor on duty. It even mentions the timings for the OPD where he can be consulted (with the shoes being the patients, of course).

Pretty cool way to advertise your business and get a potential customer's attention, isn't it?

This man should be teaching marketing at the Indian Institute of Management... pic.twitter.com/N70F0ZAnLP

The "shoe doctor" definitely got Mr Mahindra's attention. He tweeted he was considering making a small investment in this "start up" should anyone have any information about this "doctor" and his "hospital."

Got it on whatsapp. No clue who or where he is or how old this pic is. If anyone can find him and he's still doing this work I'd like to make a small investment in his 'startup'. https://t.co/A8kdJTvAN1

The billionaire businessman's team managed to track down the man to Haryana. The "shoe doctor", referred to as Naseerji by Mr Mahindra, refused money and instead asked for a new and improved workspace.

Sharing an update on Twitter this morning, Mr Mahindra wrote: "Instead of asking for money, he said he needed a good workspace. I asked our Design Studio team from Mumbai to design a kiosk that was functional & yet aesthetic."

Recall my tweet about Narseeji,the cobbler?Our team in Harayana met him&asked how we could help.A simple&humble man.Instead of asking for money,he said he needed a good workspace. I asked our Design Studio team from Mumbai to design a kiosk that was functional&yet aesthetic.(1/2) pic.twitter.com/Oefr69yAy1

But that's not all, the industrialist has asked for inputs from netizens on how best to re-design the "shoe doctor's" workspace. Mr Mahindra even says the kiosk could be treated as a template for all roadside vendors.

They flew down to meet him&produced these ideas. We would be delighted to get your inputs on the analysis & approaches & which you prefer. We want to design something that enhances the pavement aesthetic & hopefully create a template for roadside vendors..(2/2) pic.twitter.com/bNRB9bkJOi

In less than five hours, hundreds suggestions have already poured in.

A suggestion- the kiosk shld be  'mobile'/ 'wheeled' i.e., capable of being wheeled away / pulled behind a rickshaw or motorbike. Municipalities often seize and destroy fixed/immobile kiosks - this will allow him to wheel/ push his kiosk minimising the risk of loosing it all.

Give him a little shop built on a mahindra pickup.  This will give him light/fan, lockable space and mobility to move around. Also he won't have to arrange his shop everyday again to start work.  With his increasing age all these factors would become important.

What ever you make ...Help him get local municipal license also ...Or else everything will vanish away when they come to run away the hawkers when they see the nice setup he has made on road

I think the cobbler himself would have some ideas. Should be incorporated in these slides. Often, in development studies it is seen that the person whom the project is supposed to benefit, is not enchanted with the final project and ends up not using it at all.

There has been plenty of praise for Mr Mahindra as well.

"This is much better donation than money... I am delighted to see the best use of your resources for someone really needy," tweets one person. "Sir - nothing but respect for you. This tweet was my chicken soup for the soul," tweets another.

Promoted
Listen to the latest songs, only on JioSaavn.com
"That's so considerate Sir... You may also consider to make a mobile shoe hospital for him by gifting a Bolero or a Thar at a later stage," suggests a third.

If you have any interesting ideas or suggestions, do send them in to Mr Mahindra.Click for more trending news