Anand Mahindra Shares Pic With Iron Man. No, Not The Marvel Superhero

"For my album of prized memories," wrote Anand Mahindra while sharing the pic. 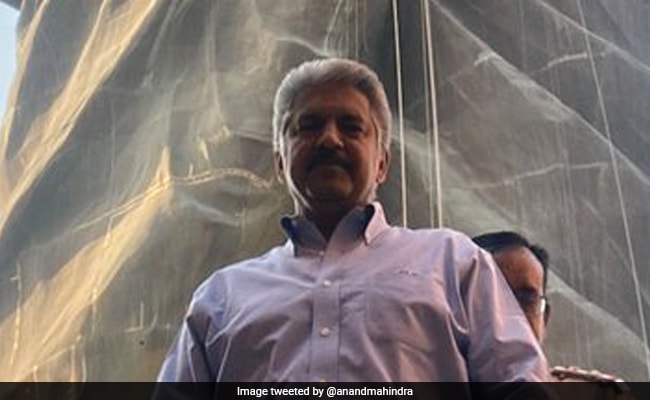 Anand Mahindra shared a pic with the Statue of Unity in Gujarat.

While travelling to Narmada in Gujarat, today, Mumbai-based businessman Anand Mahindra made a pit stop at the Statue of Unity in Kevadiya. Sardar Vallabhbhai Patel's statue – the world's tallest statue at 597 feet – has become a major tourist attraction in the state since its inauguration in October 2018. Mr Mahindra revealed that he was on his way to address the India Ideas Conclave when he stopped at the Statue of Unity.

Anand Mahindra, though an active Twitter user, rarely shares his own photographs on social media. This time, he surprised his 7.4 million Twitter followers by sharing a photo that shows him posing underneath the looming statue.

"For my album of prized memories," he wrote. "At the feet of the real Iron Man—not the Marvel character!"

Sardar Vallabhbhai Patel played a key role in India's freedom movement and got 562 princely states to accede to newly independent India. For his commitment towards national integration, Sardar Patel, whose real name was Vallabhbhai Jhaverbhai Patel, earned the title of 'Iron Man of India'.

Take a look at Anand Mahindra's with the Iron Man below:

For my album of prized memories. At the feet of the real Iron Man—not the Marvel character! pic.twitter.com/HKdDvSRgS1

Since being shared online just minutes ago, the photo has collected thousands of 'likes' and comments.

Before posting the pic, Anand Mahindra, 64, had also shared another photo of the Statue of Unity. "No words necessary..." he wrote while sharing the pic.

According to report from December last year, 29 lakh tourists visited the Statue of Unity since it was inaugurated in 2018.