Anand Mahindra shared a picture of Paramjit Kaur and said that she became the first woman to purchase a Mahindra electric auto in Punjab. 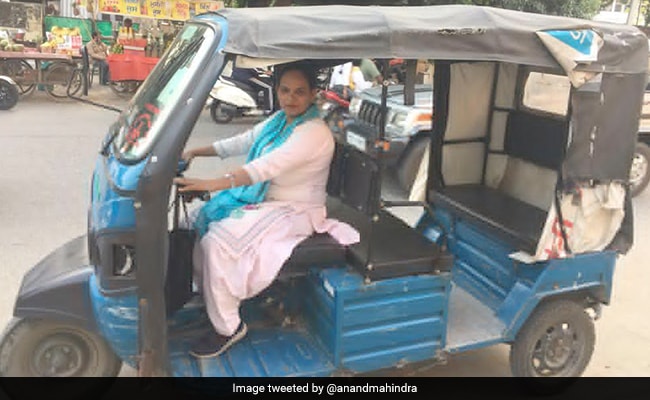 Industrialist Anand Mahindra frequently updates his 10.1 million followers on Twitter with motivational videos and inspirational messages. This time the Mahindra Group Chairman again delighted his followers with an inspirational story of a Punjab woman who drives an auto to earn a living after her husband's death.

Taking to Twitter, Mr Mahindra shared a picture of Paramjit Kaur and said that she became the first woman to purchase a Mahindra electric auto in Punjab. "After losing her husband, she became the sole bread earner. Her E Alfa Mini (Mahindra's all-electric autorickshaw) helps her support her daughters, one of whom is now in college," Mr Mahindra said, adding that Ms Kaur "showed how to rise against the odd".

Mid-week Inspiration: Paramjit Kaur, our first female Treo customer in Punjab. After losing her husband, she became the sole bread earner.Her E Alfa Mini helps her support her daughters, one of whom is now in college. She showed how to Rise against the odds #SheIsOnTheRisepic.twitter.com/GXXMe1yyUp

The industrialist shared the post on Wednesday and since then it has accumulated nearly 10,000 likes and hundreds of comments. Several internet users lauded the woman's determination to educate her daughters.

"Great! A role model to all women facing odds. Faith in herself  with will power made her lead a good life. God bless her," wrote one user. "True inspiration. This lady has shown all ot takes is a determined mind and will power to stay firm against adversities of life," said another.

A third user commented, "Salute to this lady who didn't give up and is fighting for her bread with complete honesty. India is shining because of citizens like these." A fourth simply added, "Excellent and empowering."

Anand Mahindra is an avid social media user. He often shares fascinating posts that pique the interest of internet users. He has also amplified many stories of inspirational individuals and helped place the spotlight on those who deserve encouragement. The industrialist has more than 10 million followers on Twitter.