The experts are investigating the authenticity of the note that was found in a bottle. 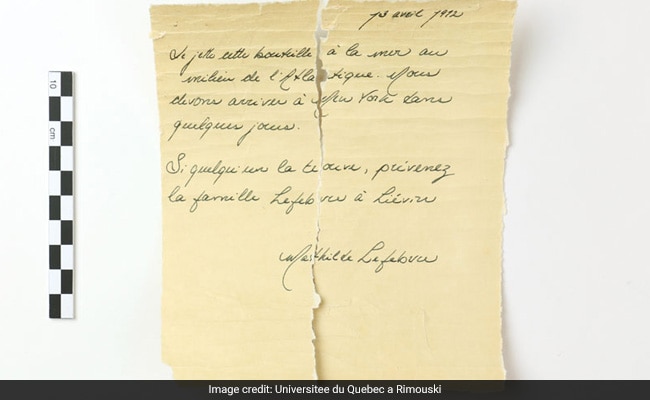 A letter believed to have been thrown into the Atlantic by a passenger on the Titanic.

It has been over 100 years since the Titanic sank in the Atlantic, but the mysteries surrounding the luxury ship continue to intrigue people. One such mystery is a paper note in a bottle said to be thrown from the Titanic on April 15, 1912 - the day it sank. The authenticity of the note dated April 13, 1912, is being investigated by researchers. According to the DailyMail, the letter was written by a 12-year-old French girl named Mathilde Lefebvre, who was among the unfortunate passengers on the Titanic. Travelling with her mother, she was on her way to New York to meet her father and siblings.

The girl apparently threw this bottle with the message in the water sometime before the vessel rammed into an iceberg. The handwritten note in French reads, “I am throwing this bottle into the sea in the middle of the Atlantic. We are due to arrive in New York in a few days. If anyone finds her, tell the Lefebvre family in Lievin.”

The message in the bottle was discovered in New Brunswick in 2017 but has been now revealed online for the general public. It was sent to the Universitee du Quebec a Rimouski for further investigation. It is still unclear whether the note indeed is from the time the ship sank or is a recent hoax. The academics are hoping to find some clues from those who specialise in the study of Titanic or even people related to passengers who were on board.

Archaeologist Nicolas Beaudry said, “The mould and tool marks on the bottle and the chemical composition of the glass are consistent with the technologies used in making this kind of bottle in the early 20th century,” as quoted by DailyMail.

RMS Titanic was a British Passenger liner that sank in the North Atlantic Ocean killing around 1500 people.

"Nothing Is Impossible": This Specially Abled Schoolboy Shows How