The video was shared by Edinburgh Zoo 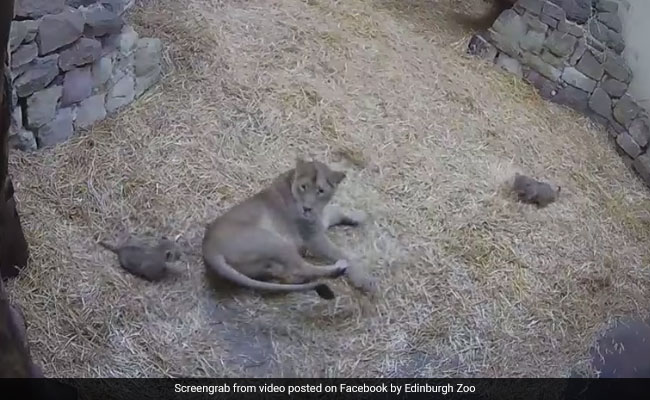 A small lion cub gave her mum a huge fright.

A tiny lion cub gets up carefully in her enclosure at the Edinburgh Zoo in Scotland. She then silently walks up to her mother from behind while she is busy watching another cub . Once within range, the sneaky cub pounces, giving her mum a huge fright and making her jump to her feet.

The adorable incident, captured on camera, has gone viral online and people can't stop "aww-ing" over the video of the cub, who is less than two months old.

Edinburgh Zoo shared the funny clip on Facebook with the caption: "Trying to relax when you have little ones." They also added the hashtag #Relatable - which many parents in the comments section seemed to agree with.

The video has been viewed over 42,000 times since it was shared on Friday. The comments section has been flooded with people gushing over the lion cub.

"Omg so cute," wrote one commenter, adding three heart emojis. "10/10 top pouncing," said another, while a third wrote "I love this".

According to Fox News, the video features Asiatic lioness Roberta, who gave birth to a litter of five cubs in August this year. Only three survived. The cubs' father is Jayendra, an Asiatic lion that came to the Edinburgh Zoo in 2012.