A Tale To Tell: Harsh Goenka's Daughter Takes A Walk With A Lion

Business tycoon Harsh Goenka shared a video of the brave walk with the lion on Twitter with the caption, "That's my daughter. Can you imagine her mother". 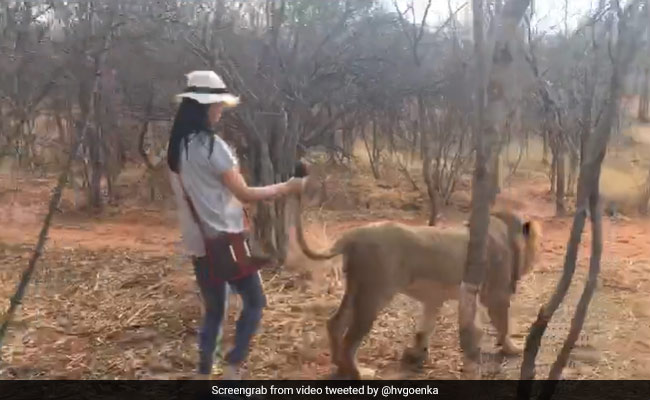 Harsh Goenka's daughter Vasundhara Patni walking with a lion through a forest area.

Looking happy and relaxed despite walking a fully grown lion through a forest area, business tycoon Harsh Goenka's daughter Vasundhara Patni was all smiles as she held on to the wild animal's tail.

Mr Goenka, who is the chairman of Indian RPG Group conglomerate, shared a video of the brave walk on Twitter with the caption, "That's my daughter. Can you imagine her mother", and a bunch of emojis to show his amusement at the feat.

He did not share any further details as to where and when her daughter took the wildlife tour. The tweet, however, could not be recovered later on the feed.

In the video, Ms Patni, wearing a hat, can be seen holding the lion's tail and following it through the woods.

Several people reacted to the post on Twitter. One user said: "Brave ! Adventurous! Courageous! Love this vdo. And yes her mother's strong traits clearly visible  and imaginable. Sympathy to you."

Brave ! Adventurous! Courageous! Love this vdo. And yes her mother's strong traits clearly visible and imaginable. Sympathy to you. ????????????

Such wildlife tours are popular in South African national parks where people experience "walking with lions" with the aim to interact with the big cats, that are trained and raised in captivity in forest areas.

The tours are widely debated with some saying that they indicate animal abuse, while others believe that the tourism helps in the lions' conservation.