A Sunrise From Space, Captured In Breathtaking Pics By NASA Astronaut

Watch the first moments of a sunrise from the International Space Station. 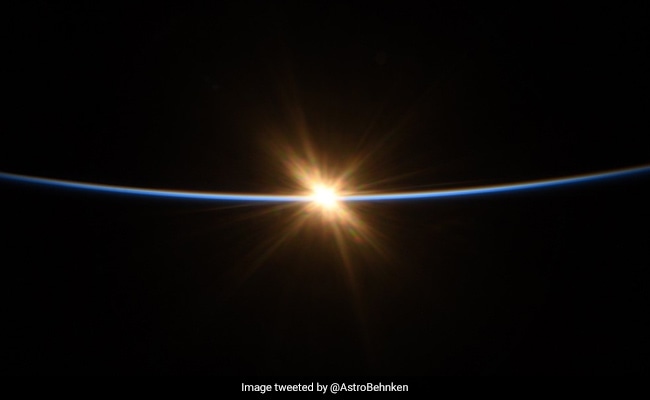 A series of four photographs capture a sunrise from space.

NASA astronaut Bob Behnken has been treating social media users to stunning pictures from space. After posting stunning views of lightning from space, Mr Behnken, who is currently aboard the International Space Station, took to Twitter again a few hours ago to share breathtaking pictures of a sunrise - as seen from 400 km above the Earth. In a series of four photographs, the veteran astronaut captured the first moments of a sunrise from the International Space Station.

"First moments of sunrise from @Space_Station," he wrote while sharing the images that have quickly captured social media's attention. Take a look at them below:

Since being shared online a few hours ago, the photos have garnered a whopping 55,000 'likes' and thousands of amazed comments.

"How cool! No one else can get THAT shot!" another remarked.

According to The Atlantic, the International Space Station orbits the Earth every 90 minutes. This means that astronauts on board witness a sunrise every 90 minutes - bringing it to a grand total of 16 sunrises in a day.

Astronauts Bob Behnken and Doug Hurley traveled to the International Space Station in SpaceX's first crewed flight in May. They are expected to return to Earth on August 2 after spending two months in orbit.

The two astronauts have delighted Earth-dwellers with a number of videos and photos from space. Earlier this month, Mr Behnken also shared a video of lightning, as seen from space, appearing as violet flashes.