Lightning, As Seen From Space, Captured In Stunning Video By NASA Astronaut 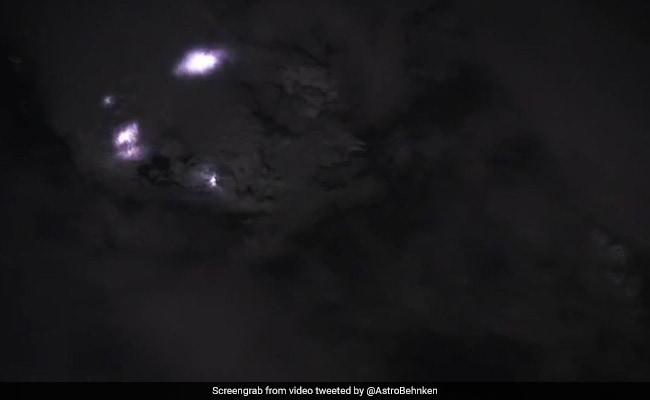 A look at lightning strikes, as seen from space.

You may have seen many lightning strikes, but chances are you haven't seen anything like this one. NASA astronaut Bob Behnken, who is currently aboard the International Space Station, has shared a mesmerising view of "lightning from above" on social media - leaving viewers amazed. The video shared by Mr Behnken on Twitter shows a dark cloud cover above Earth, as seen from space. Taken from 400 km above Earth, the clip shows violet flashes of lightning illuminate the clouds at intervals in a sight that many on the microblogging platform have described as "amazing".

"Lightning from above. The violet fringes are mesmerizing," wrote Mr Behnken while sharing the nine-second video. Take a look at it below:

Lightning from above. The violet fringes are mesmerizing. pic.twitter.com/eLCGMTbfTY

Since being shared a few hours ago, the video has collected over 71,000 views and hundreds of responses, with many thanking the astronaut for sharing the video.

This is as impressive as the Aurora Borealis. Thanks for sharing.

Bob Behnken is one of the two astronauts who travelled to the International Space Station in SpaceX's first crewed flight in May. He went there along with friend and colleague, Doug Hurley.

The two have shared many amazing views of planet Earth from space. Earlier this month, Mr Behnken had also shared beautiful visuals of Comet Neowise as it appeared as a glowing dot near the curvature of Earth.

According to news agency AFP, the two US astronauts will leave for Earth on August 1.